The Hiroshima Peace Pagoda, Buddhist Relics, and a Nice Hike

The Hiroshima Peace Pagoda, Buddhist Relics, and a Nice Hike 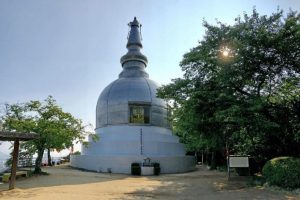 Buddhism is Humanity’s most ancient world religion, and its emphasis on non-violence is well known to all. In the wake of World War 2, it therefore comes as little surprise that Buddhism would play a crucial role in the rebranding of Hiroshima as one of the world’s main anti-war and pro-peace centres.

Perhaps most symbolic of this is the Futabayama Peace Pagoda, a project spearheaded by the pacifist Buddhist monk Fujii Nichidatsu (1885-1985). After travelling to British-occupied India in the 1930’s and meeting with Mahatma Gandhi there, he became exposed to the Mahatma’s doctrine of non-violence. It was only when confronted with the horrors of the Second World War, however, that Fujii started actively opposing militarism. After the atomic bombing of Hiroshima and Nagasaki, he decided to build Peace Pagodas all around the world.

The Hiroshima Peace Pagoda was completed in 1966 and contains Śarīra (Sanskrit term designating a Buddhist relic, known as Shali in Mandarin, Shari in Japanese) sent from the first Indian prime minister Jawaharlal Nehru, from the Sri Lankan government and the Mongolian Buddhist congregation, in an international gesture stressing the importance of world peace as well as perhaps a certain “Buddhist Pan-Asianism”. The golden statue of the Buddha Himself that is encrusted in the Pagoda is also the work of Sri Lankan artists.

It takes about an hour walk from Evergreen hostel to reach to foot of Futabayama, and another fifteen minutes to reach the pagoda. I highly recommend starting from the Futabanosato walking trail, whose entrance lies just behind the Hiroshima Toshogu shrine. This trail is lined with Tori and passes along a few small shrines as it winds up to the Peace Pagoda. Even if you are not a devout Buddhist or an ardent Pacifist, the splendid view you get of Hiroshima from the Pagoda is well worth the excursion.

Those restless souls whose wanderlust could still not be satisfied by the above can simply keep on walking. Futabayama is one edge of a “crescent” of hills that ends on the other side with Mitateyama and culminates in the middle at Ushitayama (alt. 260m, see the map). There are plenty of trails that crisscross these hills, all maintained and marked (in Japanese though, please use the translations on the map as reference), and both edges of the “crescent” are no more than an hour’s walk from the Evergreen hostel.

Going from one edge to the other, i.e. from the Peace Pagoda in the East to Mitateyama in the West passing through Ushitayama, takes about two to three hours walking, about an hour running if you are feeling especially sporty, or under half an hour if your name happens to be Eliud Kipchoge. The view from Mitateyama, Ushitayama and the Peace Pagoda are all highlights of this hike and complement each other by offering different vantages of Hiroshima. Of course, it is all free. I only spotted toilets near the Peace Pagoda, however, so do come prepared. 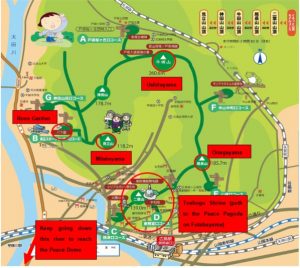 I have seen some snakes around Hiroshima (a dead one and a live one to be precise), though they are more afraid of you than you are of them (if that is indeed possible!) and tend to avoid well-travelled paths. There is no need for unwarranted panic, just for a bit of vigilance. In the end, if several magic Buddhist relics cannot help you ward off misfortune, then I am afraid nothing will.