Hi there! This is Hazuki, I’m the owner of the hostel.

Hiroshima Prefecture has access to 60-70% of Japan’s oysters. And have you ever been to Kakigoya? It’s been one of my favourite oyster restaurants for a while now. I took a visit from a friend as an opportunity to drop by again. Kakigoya is located in the Hiroshima Minato Park in front of Hiroshimakō Station. The restaurant’s huge sign can’t be missed. 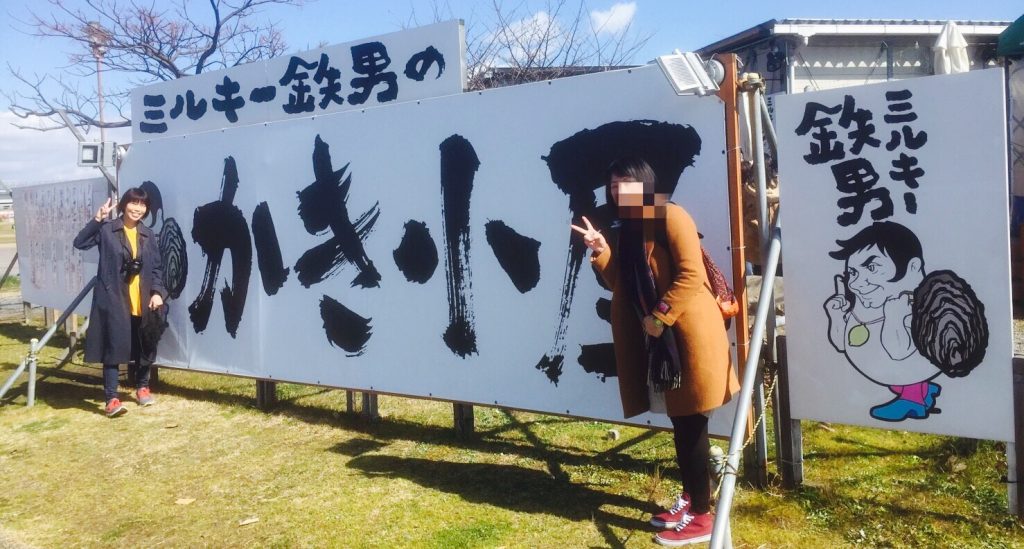 For those wondering about that Milky Tetsuo guy on the right, he is their mascot (not that it’s a very huggable one).
Even though we went there first thing in the morning, a line had already formed! Everyone sure loves oysters around here~

Here’s how it works: pick what you desire and pay the bill. Next, you’ll be guided to your seat by a grumpy middle-aged man. To put it fashionably would be to call it cafeteria style. 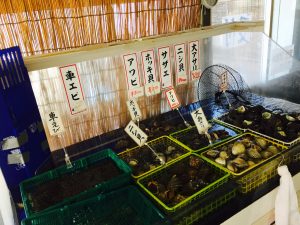 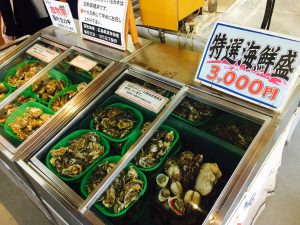 I ordered a plate of 10 oysters for 1000 yen, kaki meshi or oyster rice for 300 yen, octopus and gansu, a local fried dish made of boiled fish paste. There’s a standard 300 yen fee added for the use of charcoal. 1000 yen for 1 kg of oyster with shell is rather cheap. This translates into 10 to 12 small to medium oysters. If you can’t choose, why not have a mixed selection of seafood specialties? Although it is not visible on any picture, there is meat as well. In any case, the variety of the menu is amazing. Calling it a true haven for grill enthusiasts would be no exaggeration. I also appreciate the wide availability of different drinks

A number of vending machines line the restaurant. 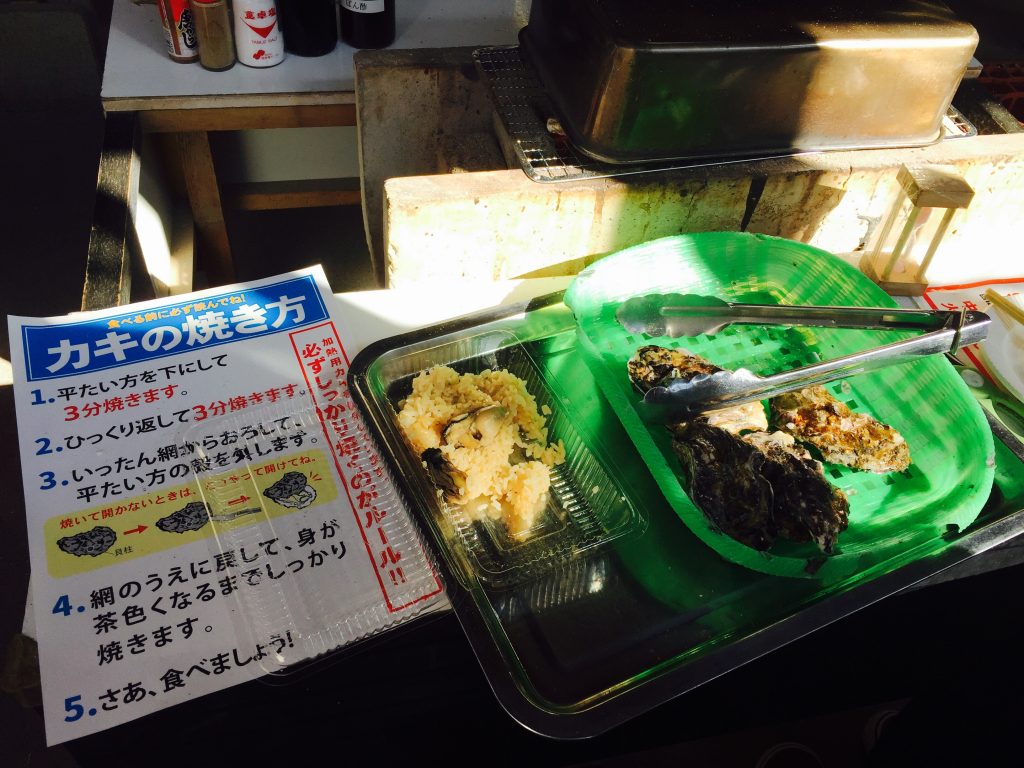 The same grumpy occhan (who we’ll call a coach because he gave so many instructions) explains how to grill an oyster. Occasionally the coach goes on patrol to check up on everyone’s progress, making blunt remarks like “Eat up. You’re overcooking it,” but he does it with love. Necessary utensils like plates, cooking gloves, oyster knives, picks for shellfish, an hourglass (important), and even aprons are prepared at every seat. They even thought of providing a vinyl cover to protect your luggage basket from stains. Naturally there’s also the usual suspects: all kinds of seasonings such as soy sauce and ponzu. With all of these amenities, it feels a bit like paradise. 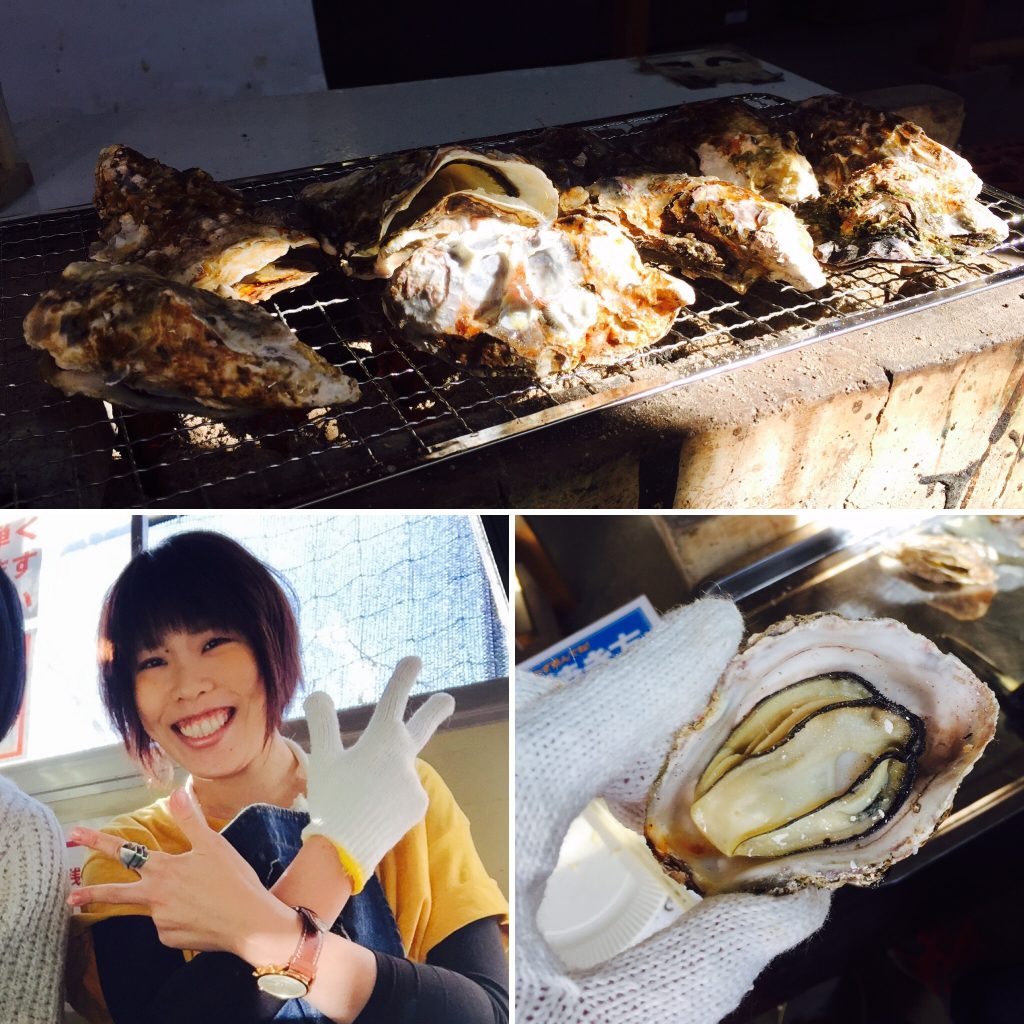 Keep an eye on the hourglass as you bake each oyster for 3 minutes on each side, as instructed by the coach. Perhaps because of the strong firepower, some of the scallops popped open and flew away. The thrill of the grill is real. It also feels like a very ‘adult’ thing to do. When it’s all getting too intense, just put a lid on it and you’re safe! Baking time depends on the condition of the charcoal and the size of the shellfish, so continuous adjustments will be required. Your coach will warn you if you’re fooling around too much! Lol. The small team of coaches may not be the most cheerful, but they’re all occhans with a good heart. All of this contributes to the unadulterated nostalgic atmosphere of an authentic, local mom-and-pop restaurant.

What I like about it most is that for this cheap price, you can barbecue your own oysters, but you don’t have to do your own cleaning-up. I wholeheartedly recommend this restaurant!!! Just by baking your own oysters, they are so much more delicious! Moreover, the oysters here are huge! Go Hiroshima!!

When I asked the coach about who this ‘Milky Tetsuo’ would be and whether this came from the owner’s name, he answered: “No, I think the naming comes from the fact that oysters are rich in iron (tetsu is Japanese for iron). But the patron’s face might bear some resemblance to the mascot…” Now I really want to see the owner’s face!

I’m thinking of coming back to Kakigoya alone when I’m having a mood during winter. I feel like this whole concept with the charcoal BBQ and the conversations with the occhan have a refreshing effect on me, haha.

There are no lavatories, so use those in the park.

◆If you take the tram from the hostel

Hiroshima Electric Railway Line 1 or 5 — Take the Hiroshimakō-bound tram and get off at Hiroshimakō, the last stop