Why it’s OK to Eat Cheap in Japan

February
7
Hazz
Culture, Gourmet, Tourism in Hiroshima
Comments Off on Why it’s OK to Eat Cheap in Japan

Why it’s OK to Eat Cheap in Japan

So you’ve been thinking about traveling to Japan? Maybe you’ve already decided some of the places you would want to go to – Tokyo, Kyoto, Nara, perhaps Hakuba or Sapporo, to a number of shrines, temples, and onsens. But then as you start planning your trip, your heart drops into your stomach as your eyes catch the headlines of many websites – “Japan is Not For the Budget Traveler” or “Food is too Expensive in Japan” and you remember how your friend (who always thinks they know everything) also mentioned just how expensive it is to be in Japan. Well, technically they aren’t all wrong. It CAN be expensive to live or travel anywhere! It can also be extremely affordable. What is most important to discriminate though is the overall quality standard that a country holds themselves to through government food and health regulations, characteristics of the culture, and the quality standards that you require to travel and eat in another country. Basically this means that yes, while living and traveling in Japan can be quite expensive, the high level standards of quality means that you don’t have to be worried when eating cheaper food.

Once you’re in Japan – even in Tokyo – you have so many options of restaurants to eat at that charge less than one thousand Japanese yen per meal and the quality of food is still sky high. So why break the bank on food in Japan when practically every meal you will eat while here is still so freaking delicious and not likely going to make you sick? At my home in Seattle USA, I almost religiously only purchase food at the grocery stores that is certified organic. I do this for a number of reasons but a lot of times I do it to ensure that the food I will be eating is handled at a higher level of care and quality standard than food that is not organic. Another thing I wouldn’t really think of doing is eating at convenience stores like how people do in Japan. In Japan it’s completely ok and normal to eat at convenience stores AND ok to eat the premade meals you can buy from there. In USA, I would not even consider doing that most of the time. Why is this? Because Japan has higher quality standards than the U.S. and uses generally healthier ingredients so even eating sushi from convenience stores is totally ok (and very tasty, too). Keep in mind, sushi of course contains raw fish. Cheap, delicious, relatively healthy, and not going to make you feel sick at all – all huge reasons why eating at the many convenience stores covering Japan is a great way to save money and sustain your trip in Japan. I’ve asked most of the people I’ve met during my stay in Japan and here is the consensus ranking of the big three of convenience stores. Coming in third, is the very common Family mart, you can seriously find these all over the place especially in the main cities. Next, would be Lawson – which has reasonable prices and good selection. Occasionally you can find a red lit “Natural Lawson” which offers healthier and typically lower calorie snacks but for a higher price than the average blue Lawson. And finally, the unanimous best from my survey is… dun dun-dun dun! 7-11. 7-11 finds the right balance between affordable, healthy, sizable selection, and most importantly – the best coffee from any of the other two convenience stores. 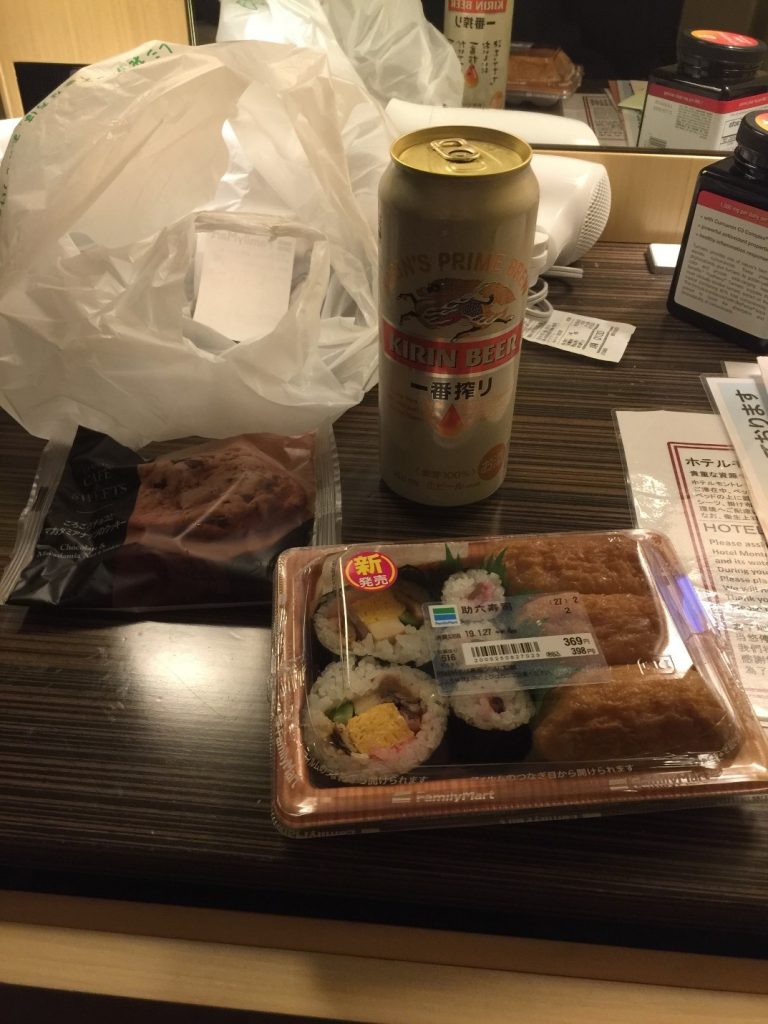 Now that we’ve got that settled, another great way to save money while traveling in Japan is to be selective about where you choose to eat. Just about any restaurant you pass by is going to smell like the Garden of Eden, but check the prices first before you go and sit down! Usually most restaurants have some sort of display of either their menu listings, pictures, or sometimes even plastic replications of their specialty meals, which is super helpful for foreign travelers that don’t speak or read Japanese. Walk around through any city long enough and you can usually find decent sized meals for as low as three hundred eighty Japanese yen. Cheap! And still filling and quite delicious. Save your money for eating at the best places that you’ve planned to go to or are going with friends. That way you won’t feel guilty the entire time and so your wallet won’t be burning a hole in your slacks. It goes without saying, but I’ll say it anyway, drinking out is expensive. Especially if there is a cover charge at the door (be sure to ask if you aren’t sure). A good way to still have a drink or two and still be the life of the party is to drink beforehand from the beers that you bought at one of the convenience stores listed above! Unlike U.S.A., it is legal to drink in public in Japan, though be sure to be respectful and don’t do it while walking and definitely do not litter your beer can(s) afterward.

Lastly, another great way to save money on food while traveling in Japan – and really, to save money most anywhere in the world, is to buy food from the grocery store and prepare it yourself. Seems like a no brainer, but yes, this is a good way to get the best bang for your buck. It can be a bit of a challenge if you aren’t staying somewhere that has a kitchen, but even then, there is still dry foods, and premade meals that are higher quality than convenience stores and generally around the same price. Even if you do have a kitchen, it can still be a slight challenge just navigating the grocery items when you don’t read Japanese. Still, after the initial meltdown you experience, you should be able to look at the packaging or surroundings to figure out what you’re choosing. For me, I’ve found that around one thousand five hundred yen gets me enough groceries for about three to four meals. Your diet may be different than mine however since I eat quite a bit and in rather large portions. The biggest perks of eating from the grocery store is not only that you get more food for less money than eating at restaurants or convenience stores, but you have a much wider selection and you get to experience more intimately the culture of the food by seeing for yourself what it’s like to prepare.

Hopefully these tips will encourage you to travel to Japan and help you to save your budgeted travel money for the things you want to do the most! Eating in Japan is seriously maybe my favorite thing about being here, so while it’s good to eat affordably so you can eat more, it’s also nice to eat at places that really catch your eye. Also, being stingy is great for the affordable traveler, but experiencing an all-nighter hopping from izakaya to tiny bars in small alleys is worth your time and your money. Some of the best experiences you can have are centered on food or drink, and it’s almost always worth every penny. When traveling in Japan, it’s very comforting to know that the budget you create for food can be extremely flexible – from downright stingy to downtown Shinjuku.