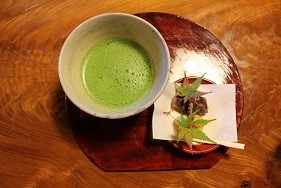 I could look around into the distance because of the fine weather and the dry air.
The Shikoku region was a short distance away!
The sea was dotted with small islands.
There are a lot of islands in the Chugoku and Shikoku regions.
I felt fresh because I was brought up in the mountains. 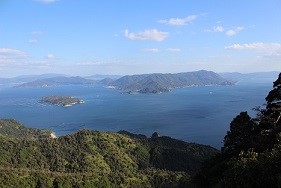 It takes about 30 minutes from here to Misen one way. It’s a mountain path.
When I was thinking about giving up on going further, my family agreed to go up the mountain.
So, I started walking up the path.

I felt cold, but I got slightly sweaty on my back after walking the path with many ups and downs.
If you are thinking about climbing to the top of the mountain, I recommend that you dress lightly and bring your towel.

There are many gigantic rocks near the summit.
At first, I thought that people had brought these rocks for their faith (I know it’s very difficult.), but I was surprised to know that the rocks had weathered into various shapes. 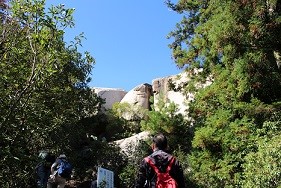 I was surprised to know that the rocks can form like these.
One of the rocks is like a tunnel, and people can go through it. Other rocks form like a whale and a boat… 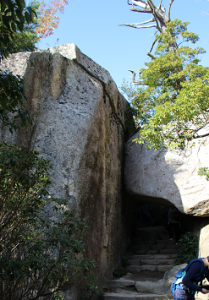 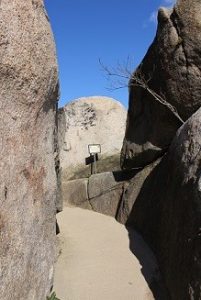 There is a neat place to rest at the summit.
I recommend that you go up to the third floor to see the magnificent view.
On the second floor, you can rest your weary feet by taking off your shoes at the seating area.
You can also throw yourself down here. 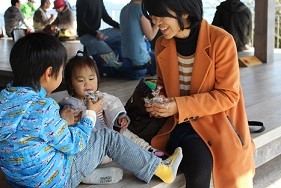 A tourist from abroad was lying down, laying his huge backpack aside.
A group of people who were doing trail running were taking a coffee break.
It’s a relaxation spot for everyone. It’s neat, and there’s a restroom, too.

I regained my breath here, and I returned to the terminal of the ropeway.

I greeted people who were tired of walking on the way back. I was also greeted by people. We encouraged each other.
It’s nice that we naturally greet people passing by when we climb a mountain.

I felt hot, but I felt great because I felt the chilly wind on my face.

Again, I rode the jam-packed ropeway on the way back to Momijidani Station.
I was surprised to find out that there were more people waiting at the terminal.
I got worried that all people could come back to the terminal until the last ride from the summit.

I walked slowly on the way back to enjoy the autumn leaves. 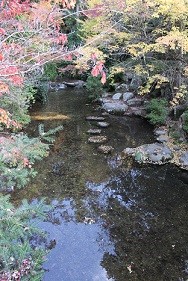 And I headed for Yukarichaya, where I wanted to go. 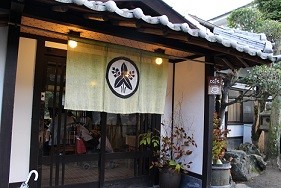 It’s located a bit away from the hustle and bustle of the approach to Daisho-in. It’s an old folk house surrounded by white wall.
After I went through the shop curtain and pulled the sliding door, I found some tables in front of me. There are 3 to 4 tables in the room floored with tatami mats in the back of the cafe.
You can drink coffee at the veranda facing the garden. There were a lot of people at the veranda although it was a cold day.
Originally, the cafe was a villa for the Asanos (the domain of Asano). That explains why the cafe is quaint… 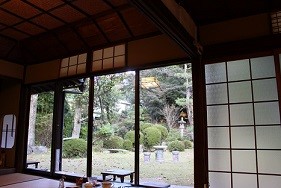 Racoon dogs were visiting the garden.  They were a parent and child, and they were playing for a while.
What a wonderful place to have coffee!!

I headed for the pier after I took a quick break at the Japanese-style cafe.

The best season to go on leaf peeping in Momijidani Park in Miyajima is from mid-November to the end of November. I think this visit was perfect time for leaf peeping.

I want to visit here in kimono next time. 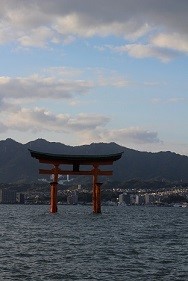 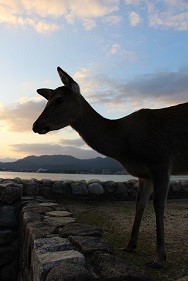