Let’s go for a drive to Miyoshi!

October
19
Hazz
Culture, General, Gourmet, Tourism in Hiroshima
Comments Off on Let’s go for a drive to Miyoshi!

Let’s go for a drive to Miyoshi!

Hi, I’m Danny. It’s getting cooler, particularly in the mornings and evenings. I especially like the clear high sky in autumn. Today, I’d like to talk about the short drive to Miyoshi, a city next to Hiroshima.

At first, I was surprised at its kanji, “三次” (kanji is a character used in Japanese). I couldn’t read it at first glance. I looked it up and found out that “Miyoshi” was on the dictionary made in Heian Period, which means that the name was used from ancient times. Originally, the kanji, “次,” was read “yoshi” in the old days. Whoa, that’s very interesting! I learned something new!

Well, let’s get back on track and talk about the short trip to Miyoshi. I visited a winery first. https://www.miyoshi-winery.co.jp/

I came here to eat grape soft-serve ice cream, but I became fascinated with the winery. (I ate the ice cream though💛💛💛)

They had a wide variety of wine tasting!

They also had grape juice for children and people who don’t drink. It’s a good news for people who drive their cars to get here, too♪
And what is more, they had “very sweet” wines.

I don’t mean that I can’t drink. Because I have a sweet tooth, I prefer alcohol that tastes sweet! For this reason, beer and sake aren’t very tasty to me.
The winery had wines that I like!!!

The series of “very sweet” wines are as sweet as juice. I tried both red and white wines and white one tasted much sweeter… I could have drunk a bottle of wine. (lol) I was impressed at its taste!!
After that, I visited a gift shop nearby and went for a walk in a park.
And I decided to eat wani dishes.

What do you imagine when you hear the word, wani?

A lot of people would think of alligators or crocodiles.
That’s what I thought, too (because wani means crocodiles in Japanese).

Can I have crocodile dishes in Miyoshi, Hiroshima?
Are they farming crocodiles?
I was confused.

Then, my husband told me that crocodiles mean sharks in Hiroshima.
And the people there eat them.

I didn’t feel like eating sharks.
I knew it was rude of me to say this, but it didn’t look delicious.

Because I came all the way to Miyoshi, I didn’t want to let the opportunity go to waste!
And I decided to go to the restaurant to eat the local dish.

The place I visited was here. 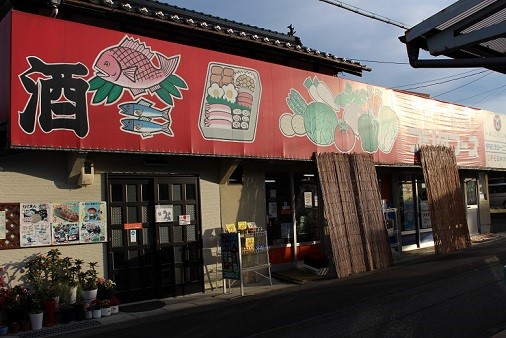 http://fujita-foods.xsrv.jp/index.php?FrontPage
The website of the restaurant recommends us to try wani. (lol)

To be honest, the restaurant is not that easily accessible. I guess a lot of tourists visit there like us. I went there in the evening of the weekend. The restaurant was dimly lit and nobody was there, so I pushed myself to enter the restaurant. Then, I was greeted by a nice manager.
The restaurant was like an old supermarket or a souvenir shop. The part of it was like izakaya, a Japanese bar restaurant… It seemed popular among local people. 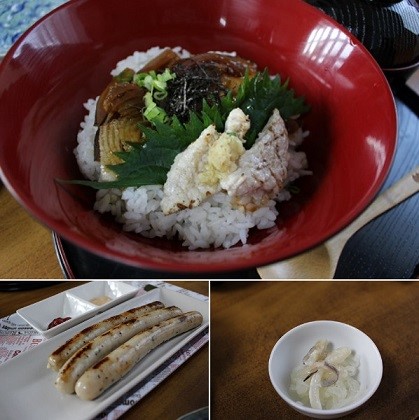 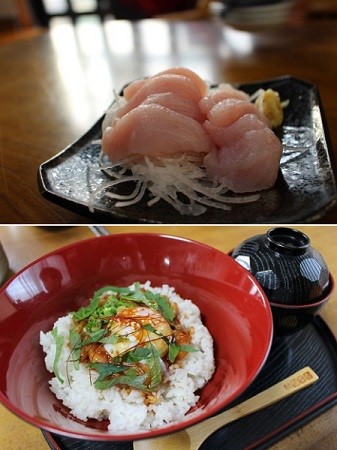 It was my first time to eat wani!
I thought it was crunchy and hard, but it wasn’t. It was softer than I thought and it didn’t have peculiar taste. I preferred raw wani such as sashimi and yukke bowl (raw wani seasoned with various spices or sauces) to broiled wani. Sausages tasted weird, though (Maybe it was herbs that tasted weird.).

I bought a wani pudding for a souvenir. It contains collagen of sharks. It tasted the same as ordinary puddings. It was very delicious♪ (I forgot to take a picture of it…)

I drank and ate a lot in Miyoshi.
It’s “autumn appetite!” (In Japan, we say autumn is a perfect season to have a good appetite.)!
Why don’t you take a little trip to Miyoshi and eat delicious food there?