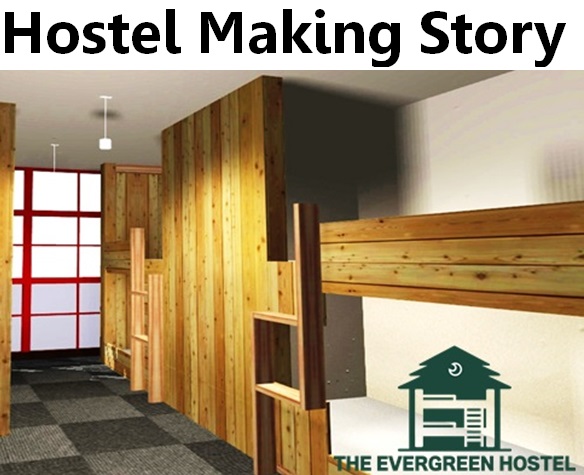 Hi.  I am Hazuki, the owner of THE EVERGREEN HOSTEL.  I’m writing how this hostel was made based on the writings that I had accumulated in the past.

As soon as I had done my job on Friday, I hurried back home and crammed PC and clothes into the bag and headed to West Exit of Shinjuku Station.

It was my second time to take an overnight bus to Hiroshima.  It’s hard and painful.  It’s like a training.

However, it’s very helpful that the bus arrives at Hiroshima Station early in the morning.

I was about to get sick from an economy-class syndrome and I dropped by at my house in Hiroshima with an unsteady walk.  I took a shower and left for the property.

Husband: “Not that this is anything new…  But you’re so busy…”

Me: “Well, I’m sorry that I’m bustling around the house.  Suppose I’m a dream or something!  Bye!

It was a crystalline autumn sky in Hiroshima.

At 11:30 a.m.  I greeted Mr. Ando, an architect.  We exchanged cards.  He looked younger than the photo on the website.

“I’m sorry, but I specialize in housing.  I think a person who is good at designing stores should handle this.  So, I’ll take my colleague with me today to the sight inspection of the property.”

Mr. Ando has a fascinating personality because he meets me in person and follows the entire project without leaving it with his colleague.

“It’ll be a long way to go, but our housing team is strong in some of the interior construction (such as small objects), so I’ll get involved with you more then.”

It’s just fun to learn something that I don’t know.  I remembered people whom I exchanged words with over store development.  They were maybe a team that handles stores.

While I was talking about my ideas and rough outlines, another designer came to our table.  He was called by Mr. Ando.  His name was Mr. Miyazaki, who had a detailed knowledge of store designing.  I couldn’t thank them enough for getting along with a suspicious stranger like me.

While we were walking toward the property, Mr. Ando told me the very important thing.

“A town near here, ‘Tokaichi’ is powerful.  There are so many nice cafes and stores that are featured on a magazine.  There is also a map of the shopping street like this.  Please take a look.”

The map of the town was a surprisingly cool design.

(I walked here slowly again at night.  It was an atmospheric “town.”)

Then, I met Mr. N to do a sight inspection.  He was amazed to see two men and said “Did you have designers to help you?”

I had seen many photos before, so I didn’t feel like it was my first time to enter the property…  Mr. Ando and Mr. Miyazaki had different views compared to me.  Especially, Mr. Miyazaki was a professional in store designing, so (it seemed that) he was checking disaster prevention equipment.  The number and location of emergency lighting equipment, checking the building structure for smoke elimination, etc.

After that, we inspected Property C together.  They said they need a week to send me the design and rough estimate for the two properties.  I feel like I’ve gone ahead.

At night, I visited the website of the company where Mr. Ando is working and I noticed that I was on Instagram.

At any rate, I didn’t know that Honkawacho and Tokaichi are so attractive…