We took off from the hostel in the early morning with the car. Our first stop was a city called Takehara. This place has a district with full of old houses. At that time the streets were almost empty without a single soul around except us. Highly recommended to take a walk around the streets and exploring the beautiful buildings around. Feels like walking in the past. The city because the Special Historical District of old warehouses was selected as one of Japan’s 100 Most Scenic Towns. 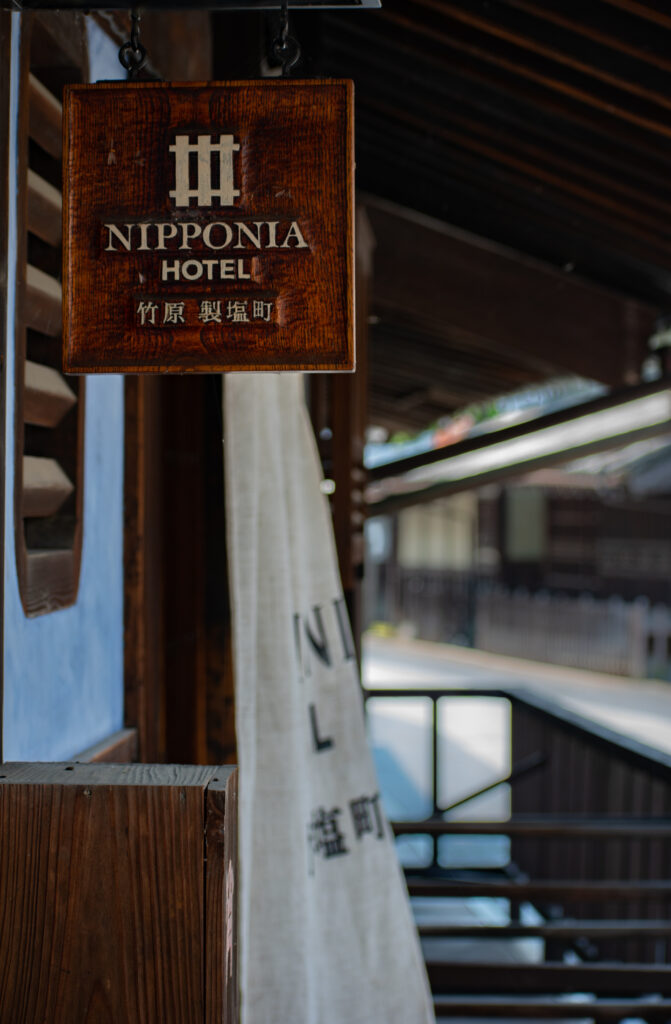 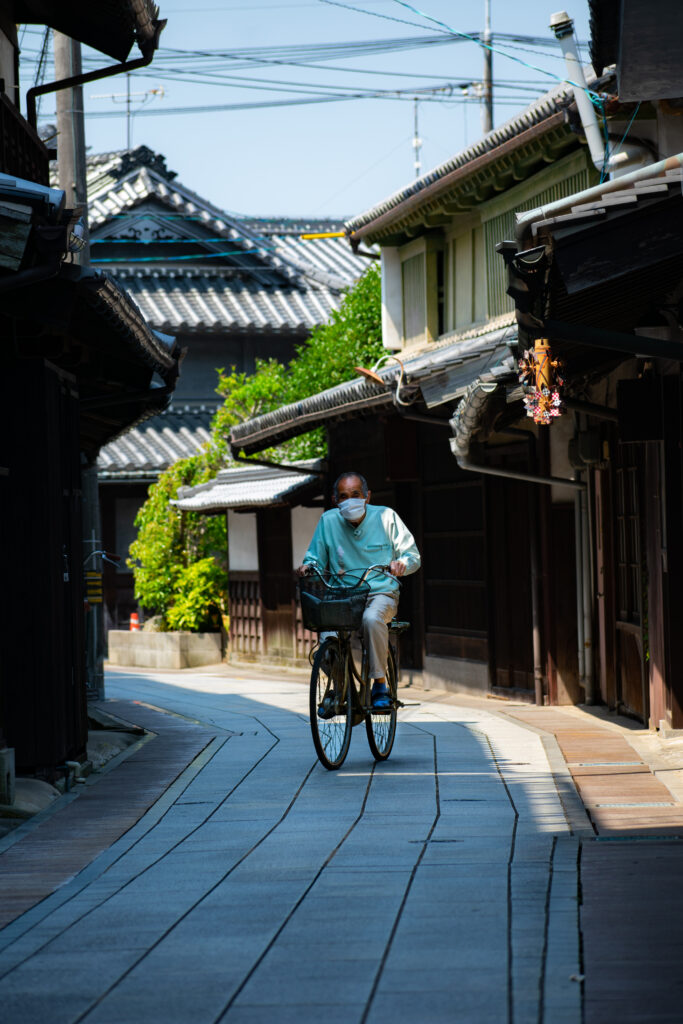 After Takehara we only needed to drive a few more kilometers and we were in Tadanoumi where from our ferry started to Ōkunoshima. In the ticket shop they give lots of free food for the rabbits currently if you are going there on the weekdays (only weekdays not on the weekends) which we didn’t know so we were already prepared with five small bags of sliced cabbage and carrots to feed the rabbits. We thought even our preparation would be too much, but at the end it was less even with the free food together.

After a bit of waiting in the ferry port we were on the short ferry transport to Ōkunoshima to make the rabbits fat around the island!

As soon as we stepped out of the ferry and started to walk we already spotted a few rabbits waiting for someone to feed them. Sometimes only one of the came out and then a bunch of them after they saw the other one got some food. 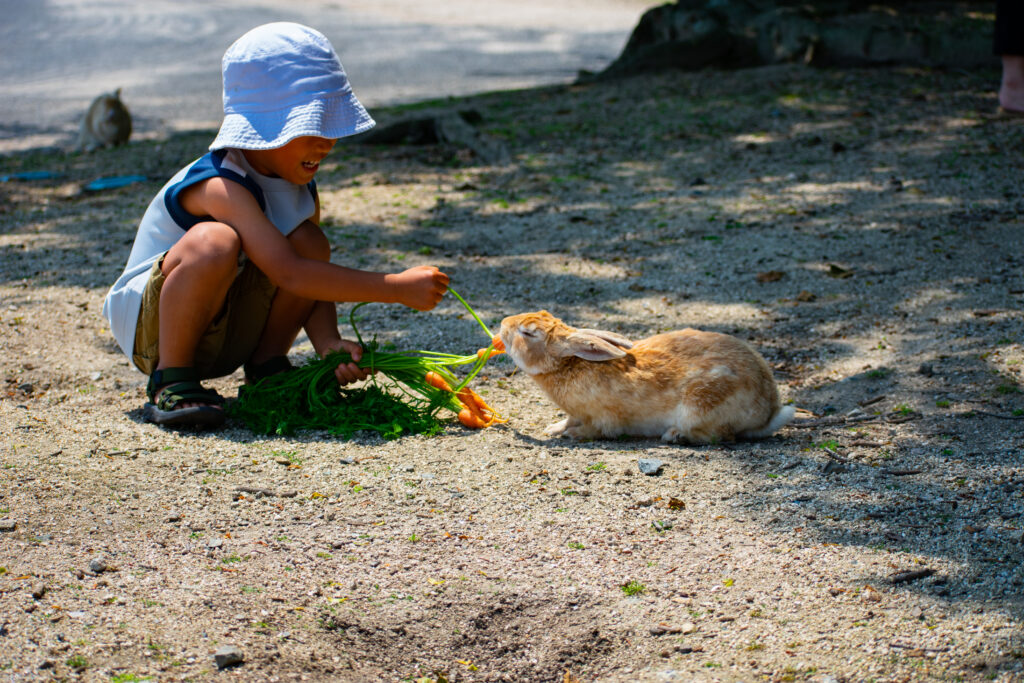 The island itself is not big at all. To take a round on the island it takes you about 4.3 kilometers but make no mistake because in summertime it is really hot and exhausting under the sun. Walking is pretty easy around the island there is no difficulty at all and there is a lot of rabbits everywhere, it is not named by mistake “rabbit island”.

There are a few good spots around the island though my favorite place was the small beach with clean blue water to take a small swim and dry under the sun. Might be a nice spot to fly drone as well just like a cliff nearby the beach for a nice clip. 🙂 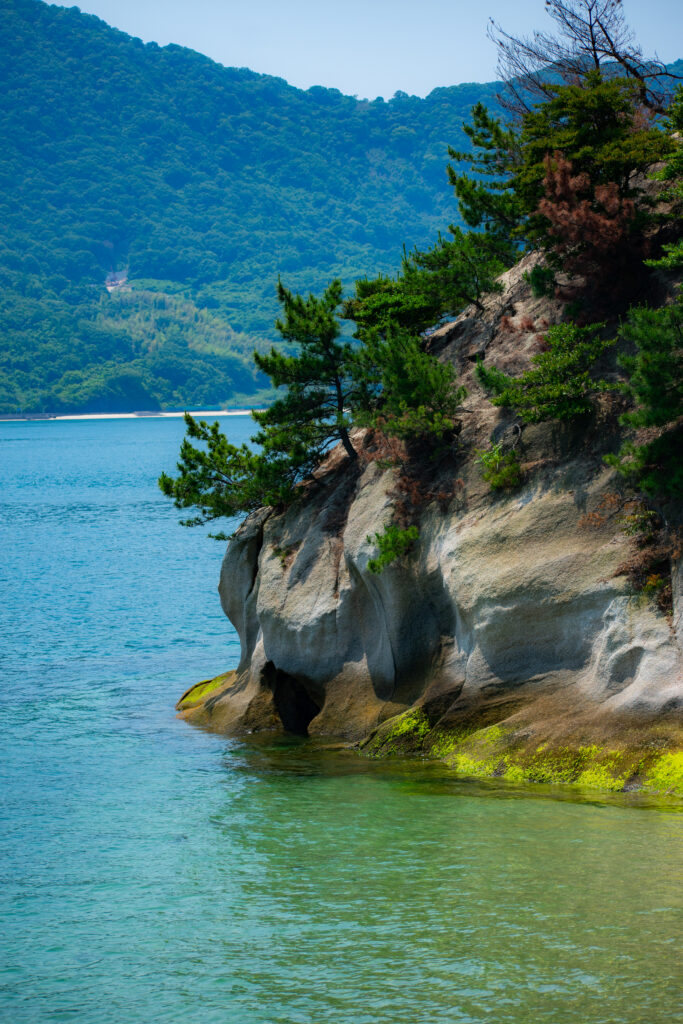 The island has an interesting but mostly sad story what it used to be during war times. 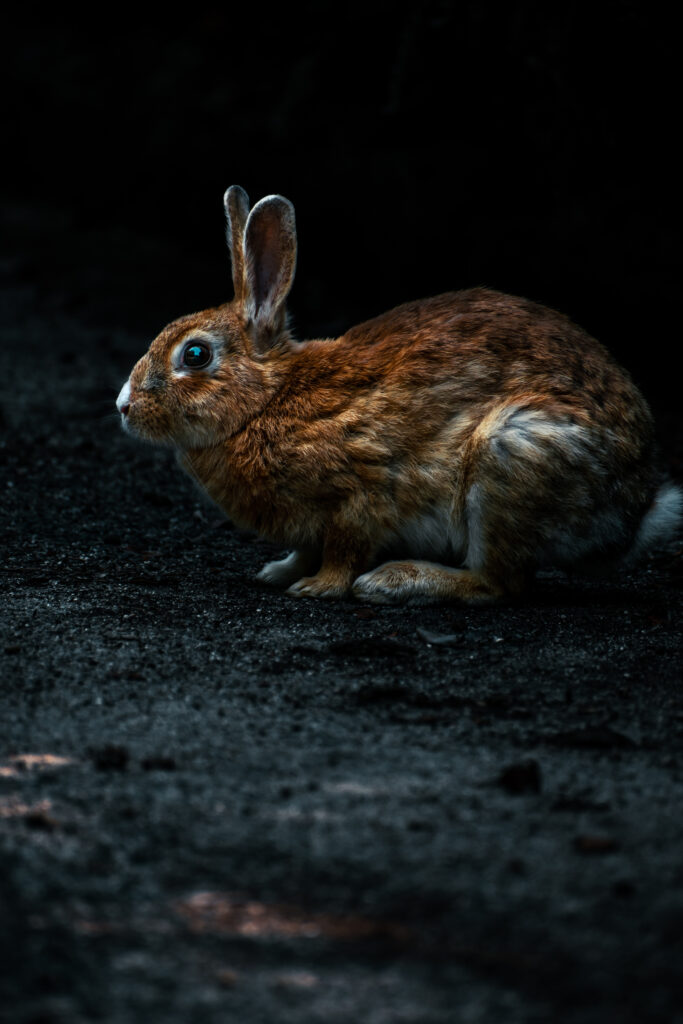 There was a secret program to develop chemical weapons and a chemical munitions plant were built in the island and they produced and tested these weapons mostly on rabbits. Japan went to great lengths to keep the work in secret on the island. None were told what are they producing. They even removed the records of the island from some of the maps.

There is a small museum on the island which costs only 100 yen. Looks small but definitely worth a visit to learn a bit more from the history of the island. Sadly at our visit this museum was closed due the virus situation in the world. 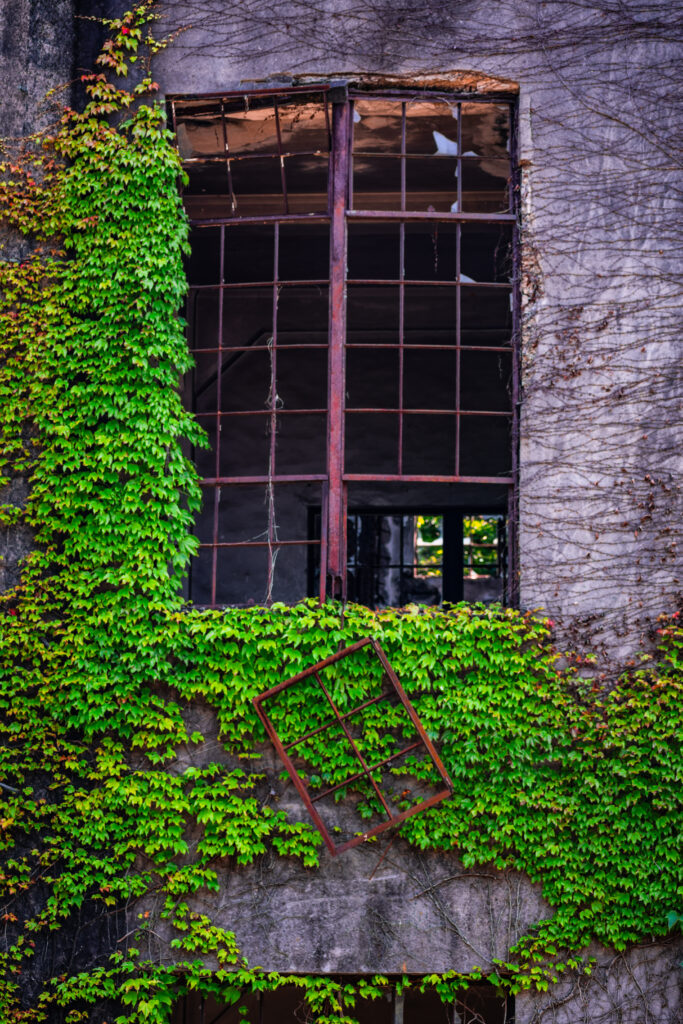 But these days nothing remains on the island from the past only the empty ruins and the writings in front of them about what are those buildings were used to be remind the people the story of Ōkunoshima island. There is only one hotel on the island but no shops, not even a convenience store so make sure that if you are staying longer you have food for you as well and enough water to keep yourself hydrated.

Nowadays of course the rabbits rule the island and instead of being removed from the maps to keep it as a secret it is getting more and more attention from tourists because of the rabbit population on the island.

So if you are thinking of visiting Ōkunoshima prepare your rabbit meal and swimming suit! 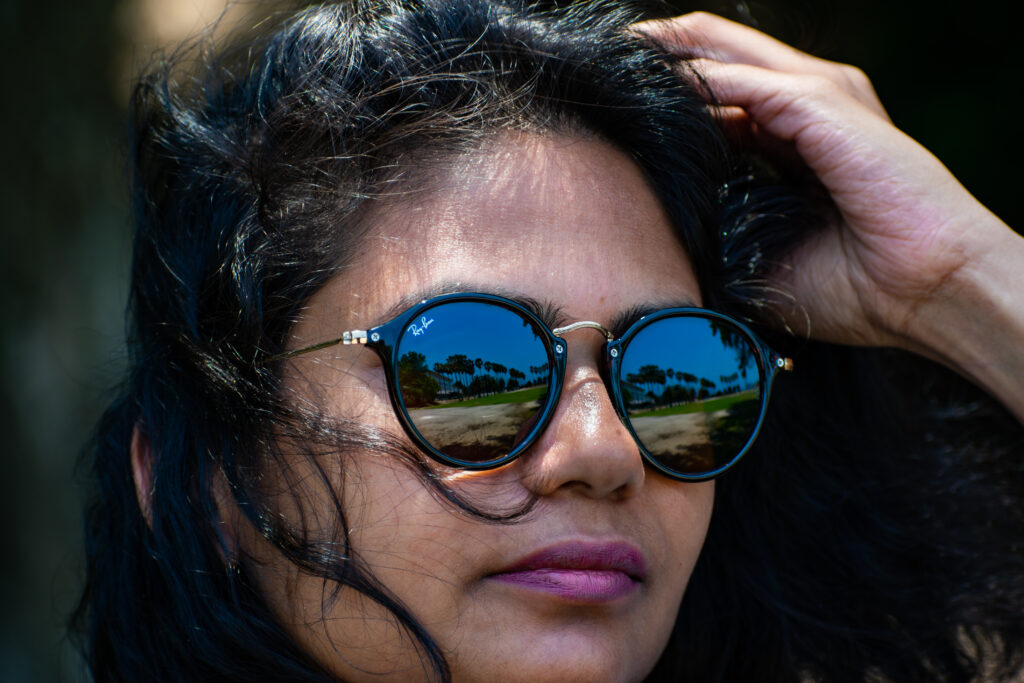 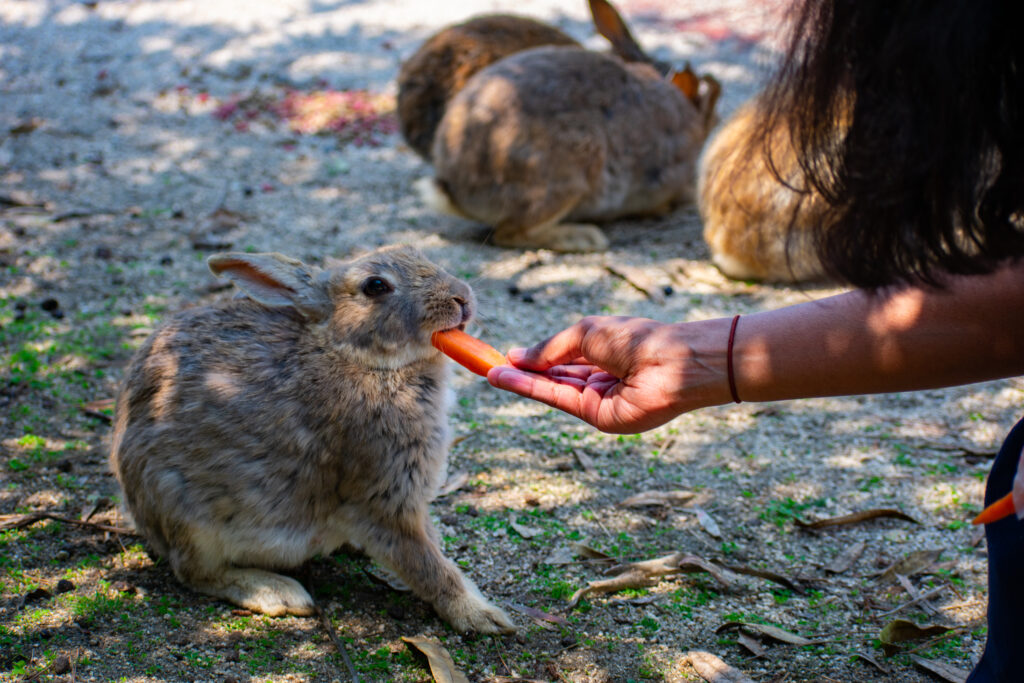 This article was written by: Zsolt Stenger