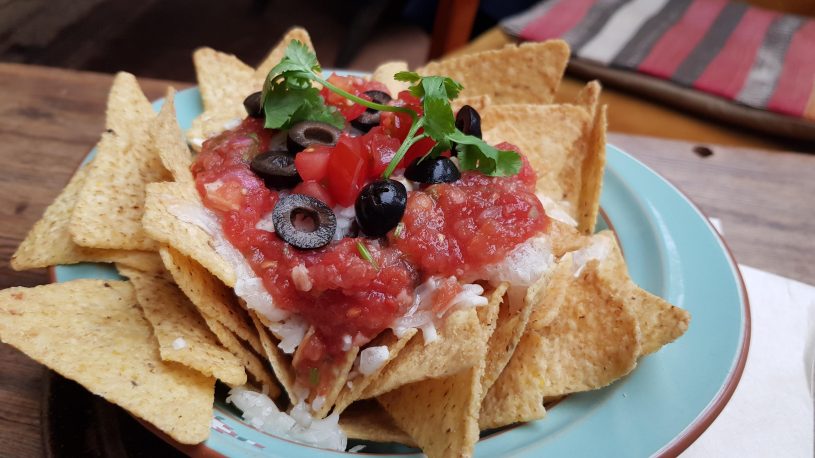 Coming to Japan as a vegan was daunting. I didn’t know the language and wasn’t sure how much veganism was understood here. I considered taking a break from being vegan during my time in Japan, but the thought distressed me.

I discovered very quickly that the concept of veganism is not well-understood in Japan, especially in the countryside. In the bigger cities, it seems that those who are vegan choose to be because of health reasons. Hence, many products are assumed vegan when they’re not. For example, many soy milks in Japan often contain animal-derived products, like emulsifiers. Bread is made with dairy and pork extract can be found in some potato chips (crisps).

So I’ve had to do a lot of research about products in Japan. ‘Is It Vegan? – Japan’ has done a fantastic job of contacting companies and confirming whether or not their products contain any animal-derived ingredients. This website, the Happy Cow app and Google Translate have saved me!

Many Japanese and non-Japanese people have asked about my diet. When I explain that I don’t eat meat (including fish), diary, egg, gelatin, or any animal extract, I’m often then asked “so what can you eat?”.

Well, this is what I eat ⬇️ I hope it gives other vegans (and vegetarians) the chance to see that despite its challenges, it is possible and rewarding to be vegan in Japan! 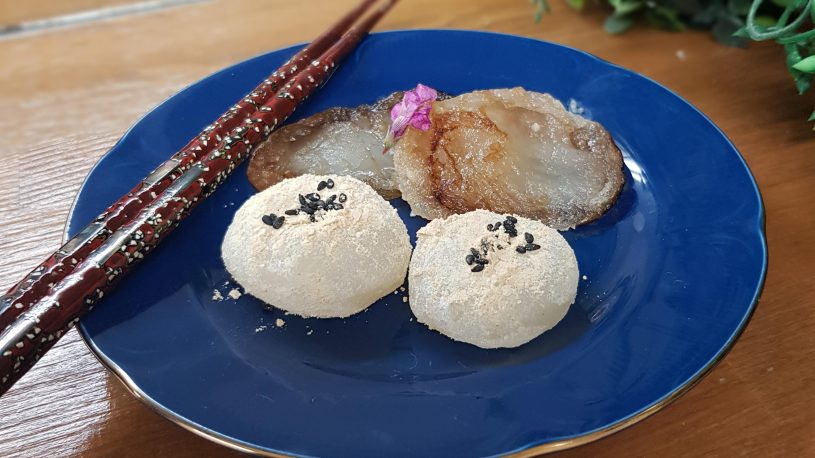 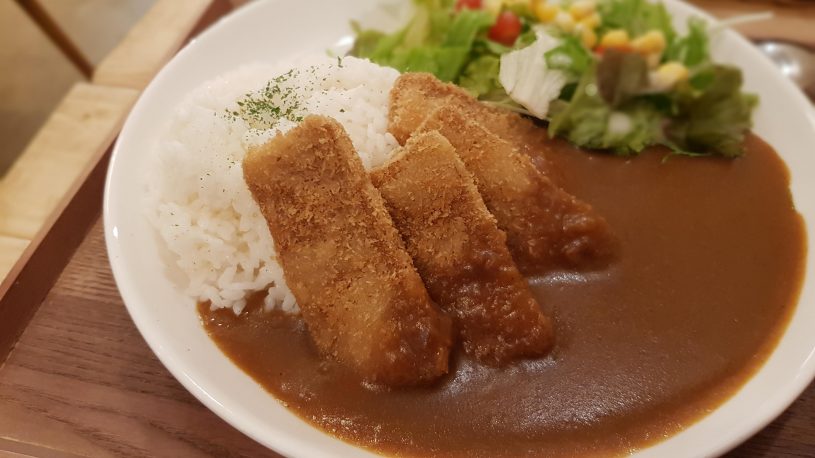 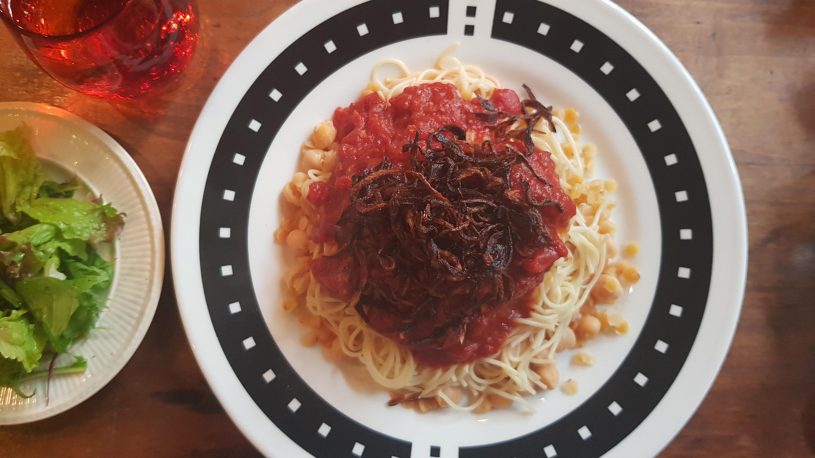 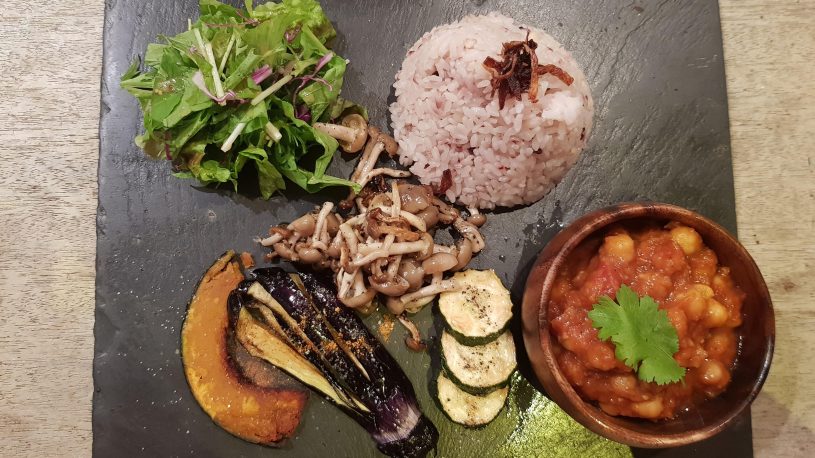 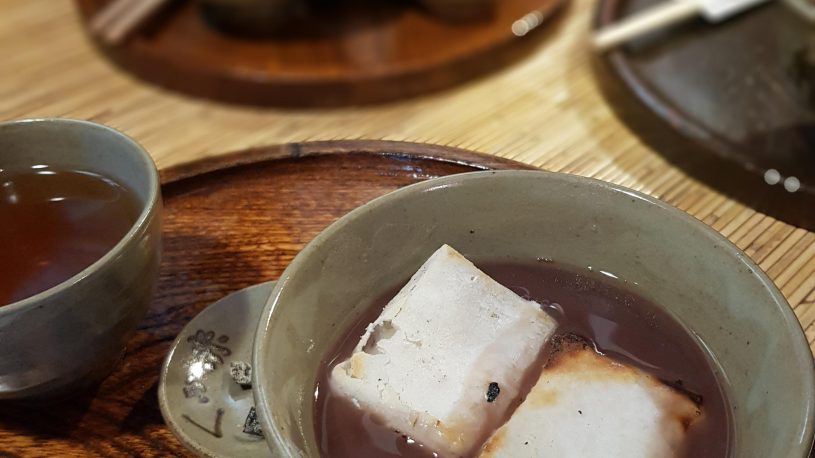 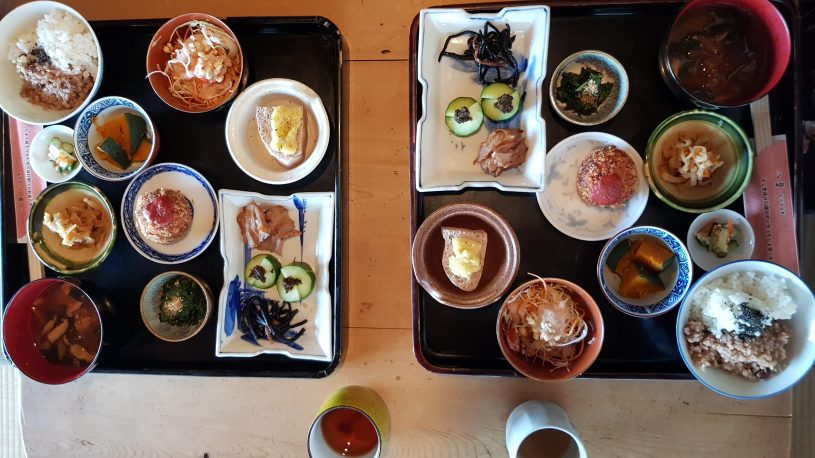 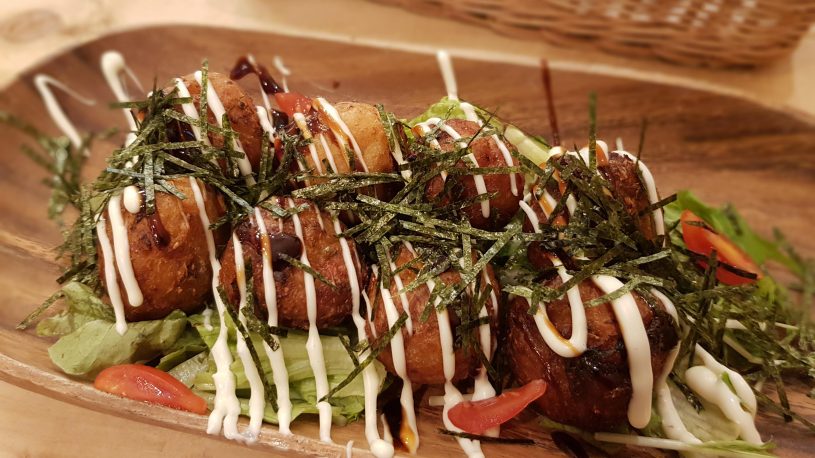 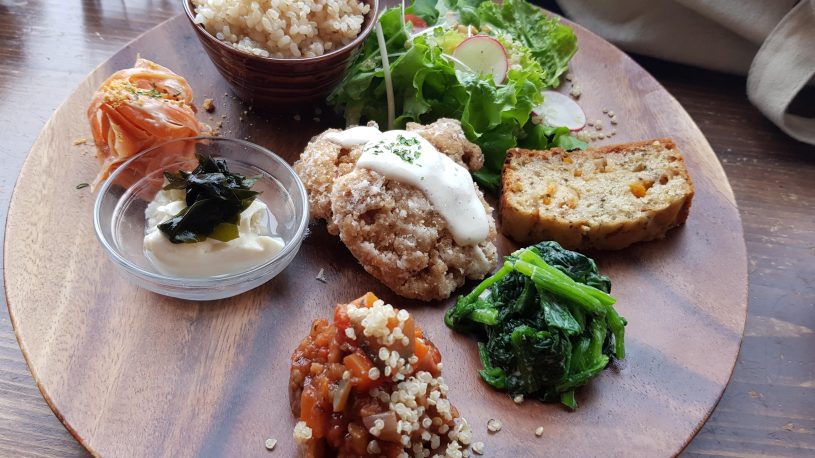 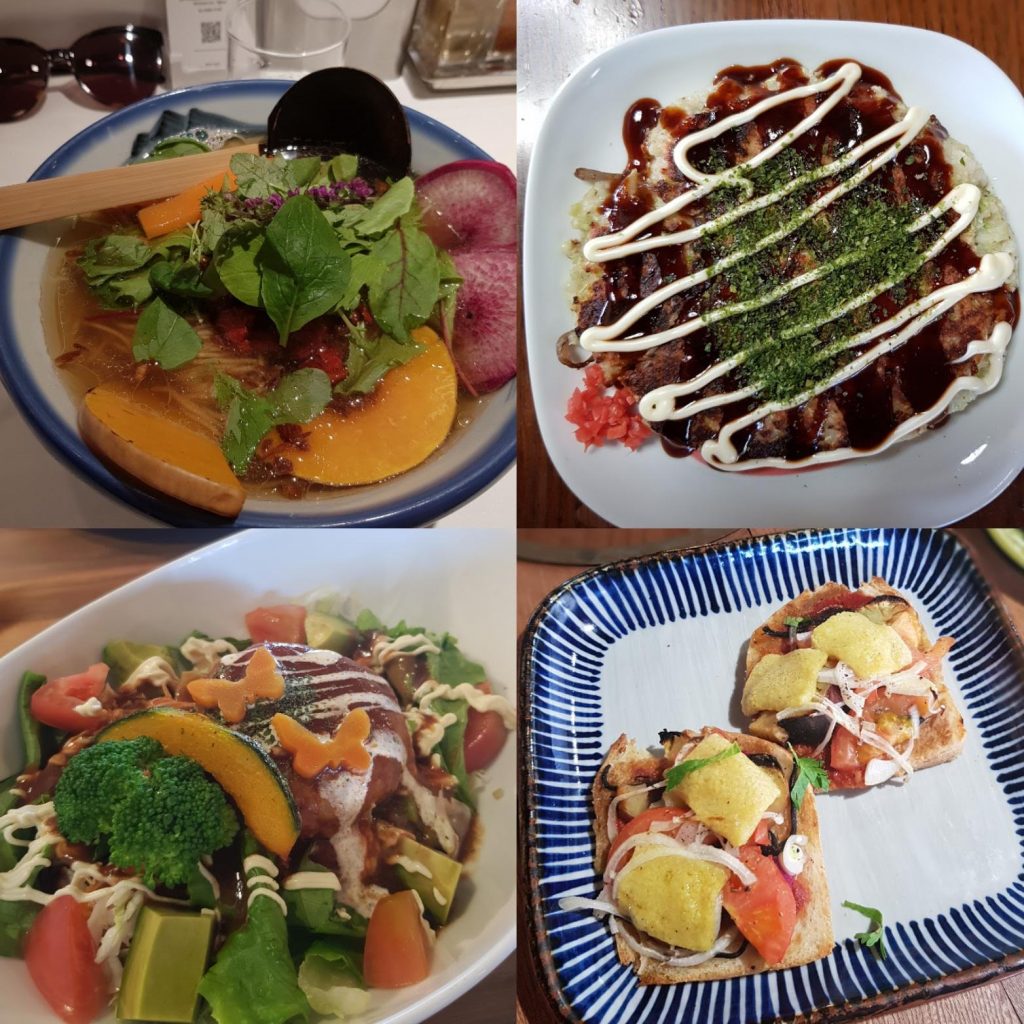 Another thing that has helped! – My amazing friend created this card for me and it lists most items I eat and don’t eat. I show this to restaurant staff, and although they often struggle to think of alternatives, it’s an easy and quick way to communicate what I do and don’t eat. 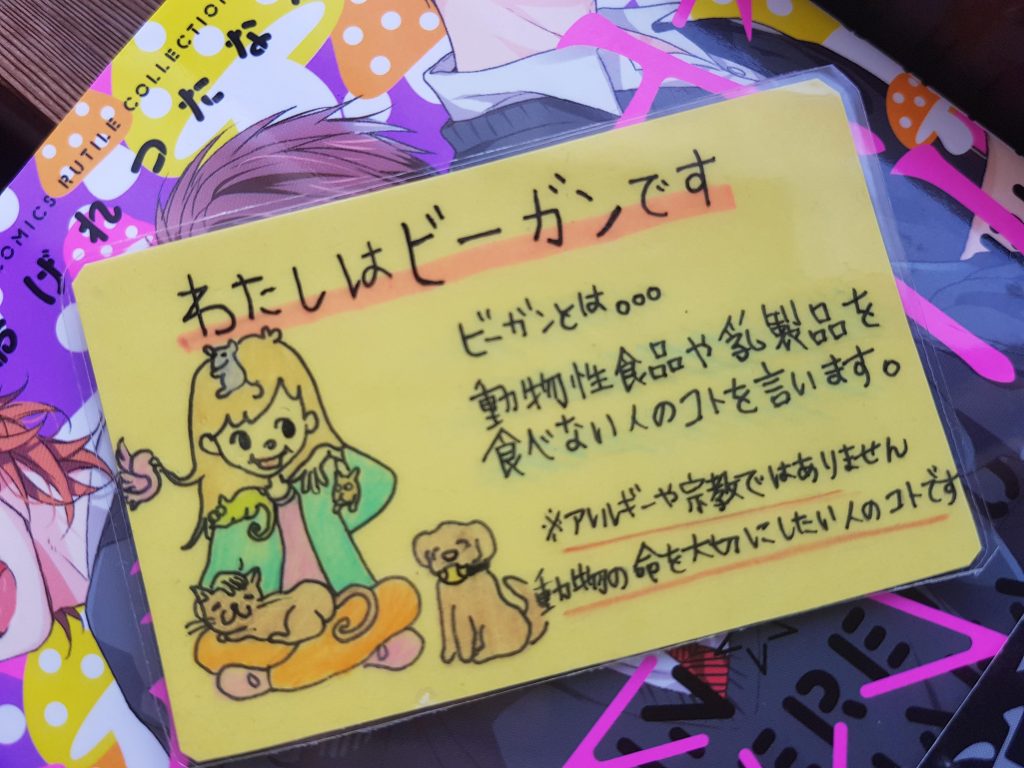 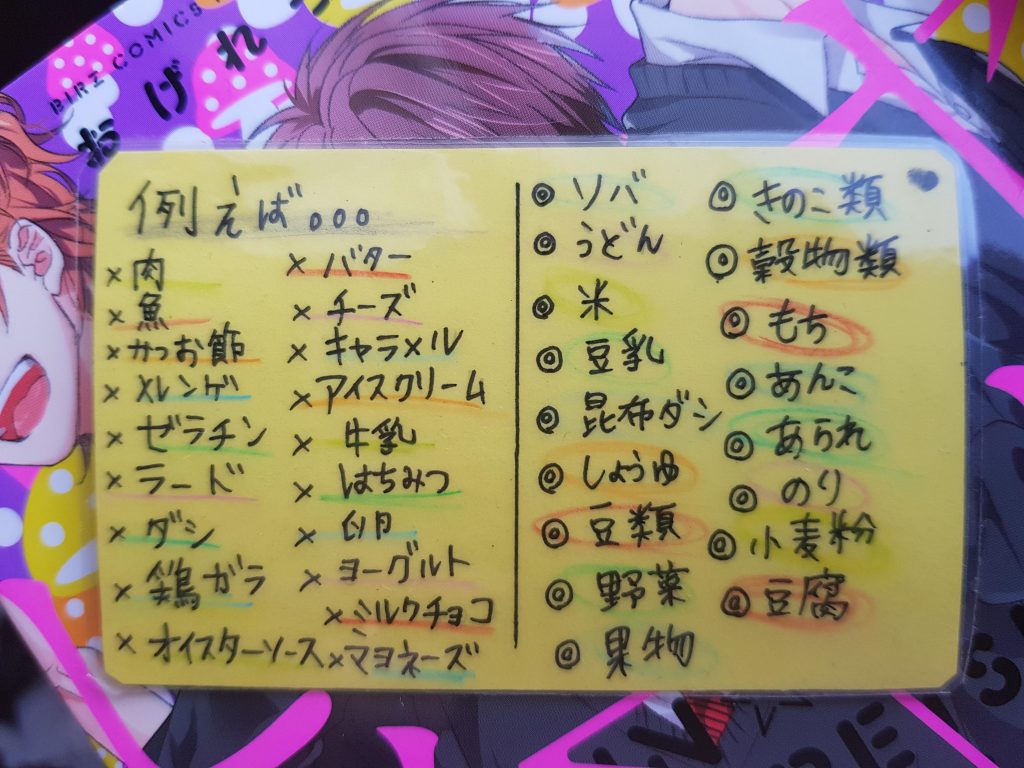 And below is an incredibly simple Daifuku (Japanese Sweet) recipe that is vegan! The ingredients are easy to find in Japan and all you need is a microwave, so I’ve beem able to make it in hostels. 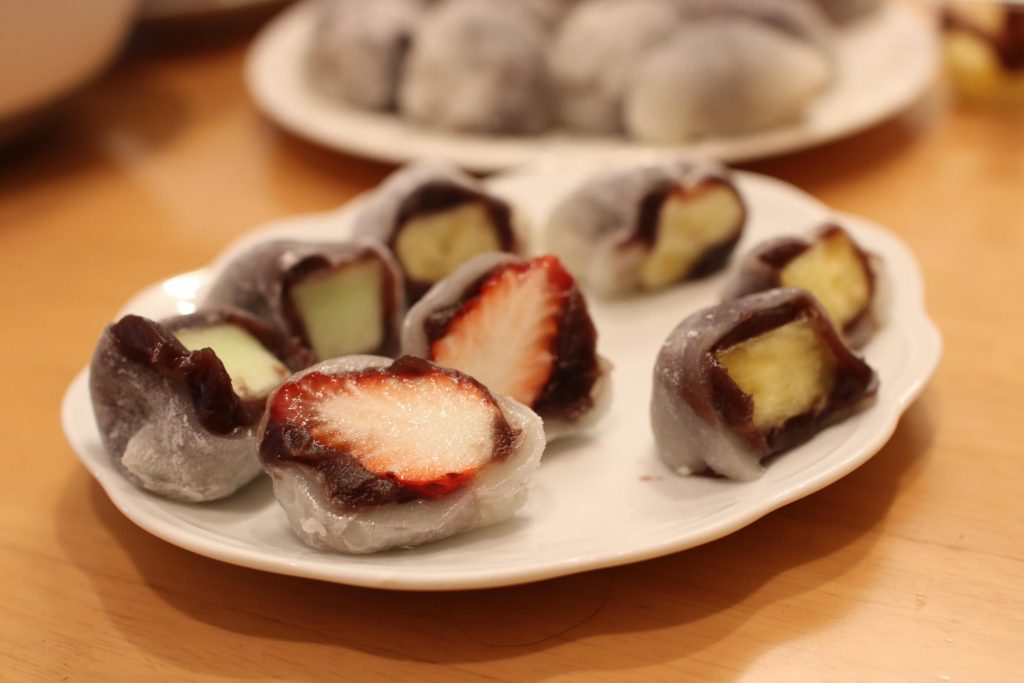 – Shiratamako (mochi in granule form) 120g.
– Water 180ml.
– Sugar 169g.
– Sweet red or white bean paste (Anko or shiroan) less than 300g.
– Strawberries (or any fruit – strawberries are delicious, but bananas are cheaper) 15 mouthful pieces.
– Cornstarch for handling, but often I use plain flour if I don’t have cornstarch.

1) Pour the shiratamako into a mixing bowl.
2) Add the water bit-by-bit and mix with spoon until smooth.
3) Add all sugar (after mixing shiratamako to a smooth texture, otherwise it’ll be clumpy).
4) Cover bowl with some kind of wrap (environmentally-friendly if possible!)
5) Microwave for 2-3mins on 600W.
6) Mix a bit, and microwave again for 2-3mins on 600W.
7) Mix until consistent. Now you have mochi!
8) Cover fruit pieces in sweet bean paste.
9) Use cornstarch/flour on hands and mochi to prevent sticking, and divide to create mouthful-sized portions (enough to flatten and cover a piece of fruit).
10) Pick up fruit with this mochi and cover to create ball.