August
5
Hazz
Culture, Tourism in Hiroshima
Comments Off on Maid to Rock

2018, Golden Week.  I had decided to visit Fukuoka for a few days.  I had been there before, and knew there was a really cool place called City Canal Hakata, a massive, multi-winged, indoor-outdoor mall hybrid.  Tons of stores and restaurants, as well as an IMAX theater up on top.

That week, as it turned out, there would be free live shows at the mall, and one of them was an all-female rock band.  As someone who has always loved rock and played music himself, I just had to sit in and watch.  And I was blown away, particularly by the drummer.  Once I returned back home to Shunan-shi, I went on a mad Youtube search, trying to find every song or performance that I could.

But then a funny thing happened.  Nothing out of the ordinary, but Youtube had brought to attention other Japanese female rock bands on their recommendations list on the side.  I scrolled through, clicking on ones that appeared worth watching, with some I knew already, like Scandal and Stereopony.

And then it happened.  That’s when I came across a group called Band-Maid.

(Quick sidenote: The band was put together with the concept of wearing kawaii maid outfits and playing heavy, hard rock music, to create a “gap” for their audience, and thus the name “Band-Maid”)

In the thumbnail, I saw what appeared to be a close-up of an attractive girl with piercing eyes, rosy cheeks, and wearing a black maid hat with a pale, blue rose, singing into a mic.  The song was called “REAL EXISTENCE.” I clicked, and like Neo taking the red pill, my world got turned inside out, and it hasn’t been the same since.

The video and music began straight away, the girls, performing in front of and inside an old Japanese temple.  It had an insanely heavy rhythm section and distorted guitars playing a riff that seemed a callback to older Western hard rock music.  I was shocked and spellbound at how intense these girls were playing, especially in contrast to their more delicate couture.

“Is this really them?”

“Damn, they are just going at it!”

I was just so entranced and couldn’t believe how skilled and mad and wild and beautiful the song and these girls were.  Not only the level of technical ability, but the sense of feel and melody throughout the song was immaculate.  How had I never heard of these girls before?  Why weren’t they a huge deal and known by everyone?  When will I meet them and marry one of them?

So for at least a good hour at a Starbucks near my apartment, I watched video after video after video after video, until they simply ran out of available videos at that time.  And what was more amazing was that there wasn’t a single bad song that they had made.  Their songs, all across the board, were amazing, worthy of making the top of the charts, if there were such a thing as musical justice.  Every time I thought, “There’s no way they can have a better song than this,” the next song blew me away even more.  I honestly couldn’t believe that there was a band this good, and I was especially blown away that it was an all-female rock band.

Now don’t get me wrong.  I’ve listened to some amazing female musical artists, and at any given time, at least half of my playlist is filled with female vocalists and musicians.  But this was the first time I had come across a full-on hard rock band, made up of these amazing ladies, and not only playing as well as some of the best rock bands out there, but outperforming them!

They were and are THAT good!

So where do you go after watching all of their music videos?  Well, you get all their albums and listen to the rest of their catalog (World Domination, Just Bring It, Brand New Maid, to name a few).  You search for anything even remotely related to them on Youtube and Google.  You watch their interviews and read their biographies.  You post up all their videos on your Facebook page and tell everyone to listen to some of the best music in the world, and you mention it in every chat you have with everyone you’re talking to.  In other words, you become obsessed; which is exactly what I did.  Without even realizing it, I had found an addiction that I have yet to this day to abandon, and see no reason or possibility of that happening any time soon.

Now, how does Band-Maid have anything to do with Hiroshima or The Evergreen Hostel?

Well, after all my obsessing over their music last year, I found out that they would be touring Japan.  The performance that would be closest to where I lived was in Hiroshima, a place near and dear to my heart for a number of reasons, but especially because it became my home away from home, as I stayed at The Evergreen Hostel for nearly a month while looking for a job here.  It seemed appropriate that I would watch my first concert of my favorite band at a place that had already given me so many of my firsts and favorites in Japan.

So on Saturday, September 22, I boarded the Shinkansen, and arrived shortly at Hiroshima Station.  I had a few hours before the concert began, so I met up with Hazuki, and we grabbed some Subway and chatted for a while.  It was nice to catch up (as it ALWAYS is), but after a bit, it was time to head over to Hiroshima Parco in the Hondori area, on up to Club Quattro, a 700 capacity venue on the top floor.

Yesterday, before the concert, I had a chance to meet up with a good friend of mine, Hazuki. She’s the owner of @evergreenhostelhiroshima and one of the reasons why Hiroshima feels like my “hometown” in Japan. One of kindest and most generous people I know. It’s good to have good friends. #friend #친구 #토모다치 #tomodachi #友達 #ともだち #日本の生活 #japanlife #lifeinjapan #일본생활 #일본어공부 #日本語勉強 #japanesestudy

And it was amazing.  The excitement, the energy, the charm and the charisma; the absolute power and intensity of the whole night was beyond my expectations.  I could not remember the last time that I had sweat like that or screamed like that, or been so in awe of other humans (although I’m not even sure if that’s what they are).  For two hours, their sound was loud and brash, yet precise and moving.  Each member – Saiki (vocals), Miku (vocals/rhythm guitar), Misa (bass), Akane (drums), and Kanami (lead guitarist) – all moving together like a well-oiled machine, but individually, all virtuosos at their respective instruments and roles. 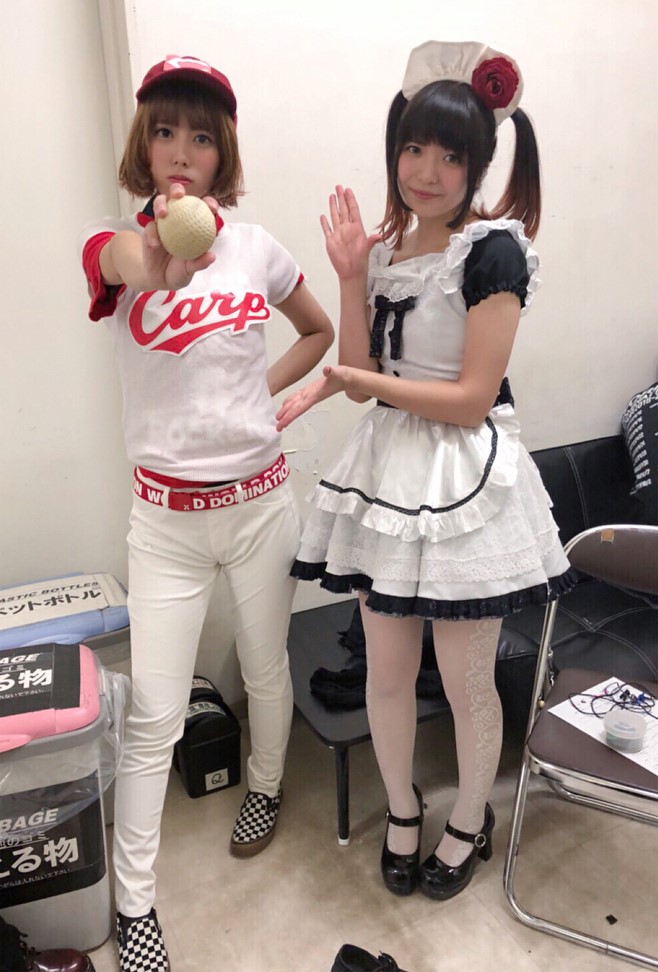 I left that night, discovering that my obsession had taken on a new level: the live show.  Since then, I’ve attended three more of their shows, and twice, in Tokyo and Osaka, I’ve flown in, only to fly back the same day (Tokyo), or the morning after (Osaka).  And they’ve only gotten bigger and better.  Before you’re just a speck in back of the arena, I’d recommend you come on out to see them up close and personal while they’re still performing at smaller venues. 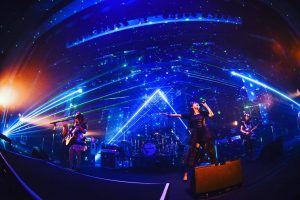 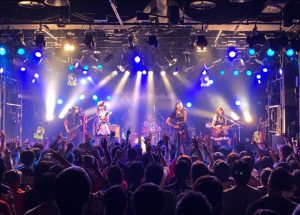 They wrapped up their European tour last month, and after two months of festivals and a few shows in the U.S., they’ll be back in October, touring across Japan, including Hiroshima at Club Quattro, on Sunday, December 8th.  If you’ve got the time and money, there’s no better way to spend both at Club Quattro, being completely dumbfounded at the behemoth that is Band-Maid. 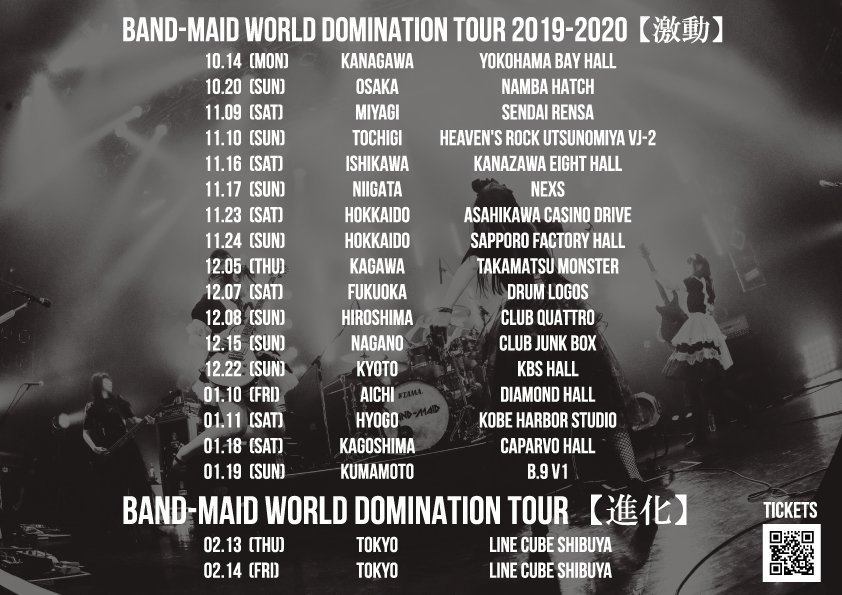