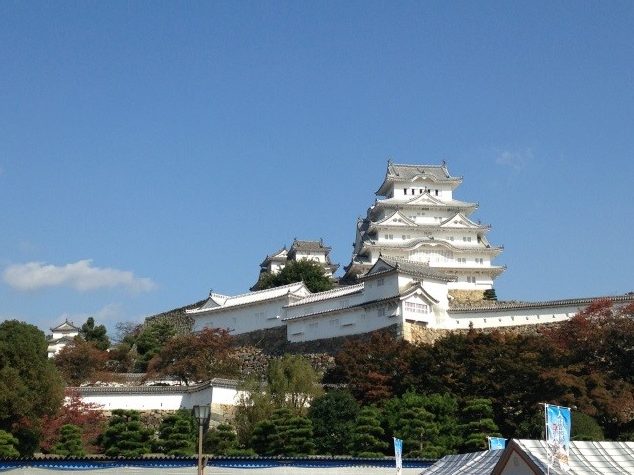 It’s perfect time to see autumn leaves in the mountains. They are turning red and yellow now. It’s a bit strange to see autumn leaves although the streets of the town are in full Christmas mode(lol). Many leaf peeping places have been reported in the media these days. But today, I’d like to talk about Himeji Castle, where I visited earlier this month!! 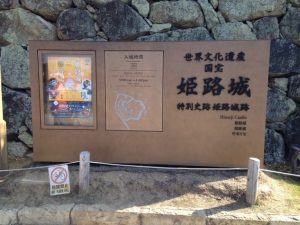 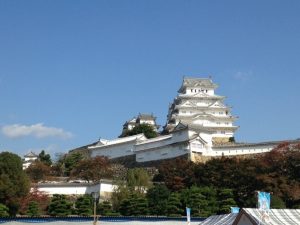 Himeji Castle is also known as Shirasagijo, which means White Heron Castle in English. As the name suggests, the castle is white!! I’m not a castle geek, but I got quite excited about seeing this World Heritage Site with my own eyes. It’s surprising that not only walls but also tiles are painted white. You can get to Himeji from Hiroshima by just taking Sanyo Shinkansen! It’s a short distance away from the station, but it’s fun to walk down the shopping street. There are a good coffee shop and a bakery on the way to Himeji Castle, so you can enjoy eating around here. I visited on a three-day holiday at the beginning of November. “Pottery festival” was held in the square in front of Himeji Castle!! Potteries (ceramic tableware) were from all over Japan such as Tohoku and Kyushu regions! They were cheap! Honestly speaking, I have little knowledge of potteries. I was surprised to know the variety of potteries; there were 30 kinds of potteries at the festival. One of the potteries was white and transparent, which was very beautiful. The other one was somber brown, but the burnt color was unique (Bizen-yaki from Okayama, for example). It’s called “wabi-sabi” in Japanese culture. It’s very interesting to compare each pottery. Potteries look different because they are handmade. Personally speaking, I prefer the one that is colorful and glittering. (Seto-yaki was my favorite☆) The event is held at this time every year, and this year was 30th anniversary. “Confectionery fair” by master craftsmen was held at the same place! It was a world of pièce montée!! I was very impressed by Himeji Castle made of bean paste!! There were demonstration sales of bean paste, too!! 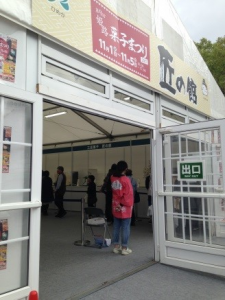 I talked a lot about the events around Himeji Castle so far. Himeji Castle was beautiful as we all know (^^) Well, it was 壮大(magnificent), 荘厳(sublime) and 豪華(gorgeous)!! I feel like using difficult kanji (Chinese character used in Japanese writing) to explain how elegant it was. Himeji Castle is famous for its defensive features, so you have to walk far to reach the main keep from Otemon Gate!! You have to go through narrow and winding paths. 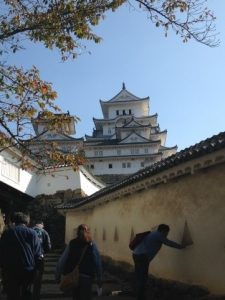 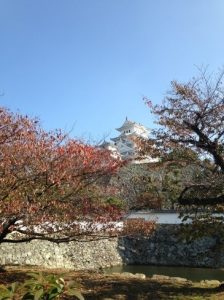 This window was used to defeat enemies! Path like this is located everywhere! Himeji Castle from this angle is very beautiful!! The autumn leaves are beautiful, too. You can’t have a picnic inside the keep (entrance fee is 1,000 yen), but there were a lot of people who were having a picnic in the grass area. And an event called “Ningen Shogi” was held in the square on that day. 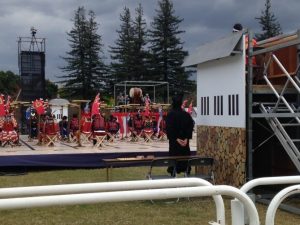 People (probably elementary students) were dressed as a samurai, and they were on the huge shogi board. Professional shogi players were watching the board from above. And they were giving directions, using microphones! There was a big screen that relayed the scene from above, too. There was a performance of Japanese drums, and it was spectacular! This event is held every year, too.
There are plenty to see in “Himeji Castle” because it’s the main purpose of the visit. However, a lot of events were held around the castle. The illumination takes place in the coming season, and people were preparing for the light-up on that day. I want you to make time (one day, if possible) to visit here (^^)