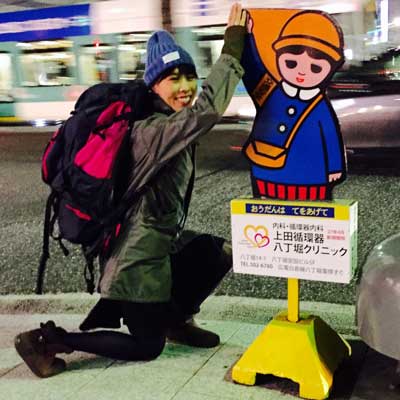 May
19
Hazz
General, Introduction
Comments Off on My background

Since construction for the rooms isn’t really going as planned, I thought I’d write a bit about my work history.
So, as a bit of a spoiler, I’ll just say that this is pretty much about a working woman in her 30’s who recently moved to Hiroshima and likes traveling. lol
Today I’ll talk about the type of work I did before coming to Hiroshima.

■2010/4/1 I started working for a Private Railway company in Tokyo.

I suddenly received an assignment, and was temporarily transferred to a subsidiary company that was part of the food business. That company was special because it often transferred new employees. (I thought the work there was interesting)
• As a regular employee, I worked there together with a part-timer. Around that time the Great East Japan Earthquake hit, and the sales for that shop and our company were in trouble.

• I was transferred to the head office, and was put in charge of sales promotion for our online magazine, as well as upkeep for our homepage and other web related tasks.

• For about two years I worked in store development (for branch stores or remodeling) as well as accounting ( all store’s sales, profit, and budgeting).

• Other jobs included, general and judicial affairs, IT, PR, HR, secretary…I did anything that was needed of me when there weren’t enough people.

Especially when doing remodeling for restaurants between 59-117 square yards, or cafes that are only about 195 square yards, once you complete one, you pretty much learn the process for others, and it becomes really useful information to have.

■The process of opening a shop

Wanting more space, or to put certain kitchen equipment here, or increasing the number of seats, or deciding that a register is better than a ticket machine- all of these are things we want to address, but for physical and financial reasons we can’t. Then it becomes a never ending cycle of “what should we do?”

Even if my department head was scary, I was able to learn a lot from them, and came to love what I did. As a complete newbie who couldn’t even tell left from right, there were a lot of things I had to learn. I’m really thankful for the experience.

I returned to our parent company, and started work at the main branch.

“Inbound tourism is a hot thing now! The rate of hotels being produced is rising across the board! Alright, let’s jump on this bandwagon and speed up our production as well!!”

The theme was so simple…But in reality that was quite difficult, and it became more complex and modern.

Until now I had worked with the remodeling of restaurants and food industries, so I knew how to deal with remaining structures. I was really grateful for this as I tackled this new work. However, the budgets that I dealt with before were child’s play compared to this. So getting approval for this budget took a long time. I would have never imagined that it would have been over ten billion yen…

The hotel market is pretty active, so we have many strong competitors. So even if we bid for a property, we had a vexingly long wait to find out if we got it or not.

So, while we were waiting, we went around to various hotels within the city to check them out, and even stay there for the night. We stayed at all kinds of places, ranging from business to the finest luxury hotels.
(but of course a newbie like me didn’t get to stay in the luxury hotels lol)

During this time we continued to inspect hotels at work, and I continued to check out hostels and guesthouses in my free time. Rather, it was from this kind of work that my love for the hotel industry, or tourism and travel, grew deeper.

When I would ride my motorcycle and stop there, or use it during traveling. Even if I didn’t stop for the night, I would still go drinking at the attached bars. The instances that really stand out for me are when I would stay the night, and then have to stagger to work the next morning after staying in the dormitories lol

■Getting a feel for Tokyo’s hostels

In the area around Taitoku were I usually went for walking, there seemed to be a lot of new hostels that focused on foreign travelers, and they all seemed to really enjoy their stays. As I would watch them come and go, I used to always think to myself, “Ah, hostels really are a fun place. Like a dream…”.

However, starting one in the heart of Tokyo by one’s self is quite the challenge. There is a lot of competition, and the price to rent space is (probably) really expensive. Everyone also seemed to have a good sense of exterior design, and even the attached bars would have a good feel about them, which set them apart. There were also a lot of chains. But at that time, I never thought of what I could do until I quit my work, or had any sort of solid resolve or ambition. Nothing at all!

So, since I became an adult, I did work in developing restaurants and hotels, as well as traveling to hostels by myself. I came from having no independence or ambition to having the wild ideas, or business sense, to think

“I wonder what the construction costs would be…”

“If I had the initial investment…”

Of course, at first, everything was done out of curiosity, or just plain daydreaming. But I’m starting to wonder now, if everything back then had some kind of hidden meaning to it.