A Short Trip to Yamaguchi #2 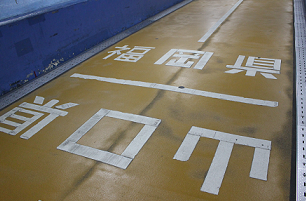 April
18
Hazz
Culture, Tourism in Hiroshima
Comments Off on A Short Trip to Yamaguchi #2

We headed for the next destination, Kanmon Tunnel.
We found Akama Shrine on the way to the tunnel. 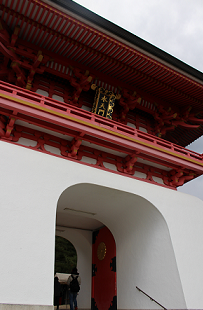 The shrine looks like a building of Okinawa. The shrine was the setting of “Hoichi the Earless,” which is a story translated by Yakumo Koizumi. A hall is quietly standing behind the main shrine. There are graves of Heike family beside the hall… The graves brought on feeling of melancholy because they are located in the place where they don’t get much sunshine. The weather was bad on that day, too. Emperor Antoku died at the age of 8. What did he think at the shrine, where it has a wide-angle view of Dan-no-Ura? I felt sorry for him.

We returned back to the original road and headed for Kanmon Pedestrian Tunnel again. And we finally arrived at the tunnel! 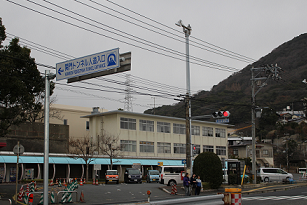 The elevator took us to 55 meters below ground. 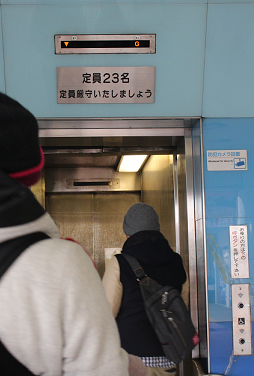 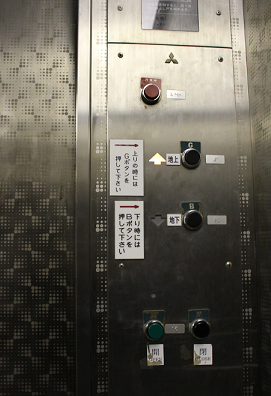 We arrived at the basement floor!! This is Kanmon Pedestrian Tunnel. You will be at Kyushu Island when you are at the other side of the tunnel. Kyushu Island was nearer than I expected. 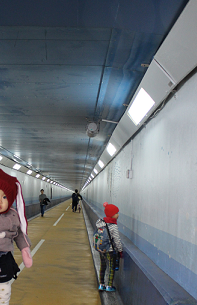 There were a lot of tourists at the tunnel. But there were many local people who were training for a marathon. They were running back and forth between the tunnel. There are various ways to use the tunnel.
I found the border between Yamaguchi and Fukuoka! We crossed the border on foot. 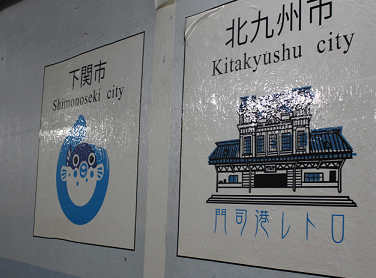 When we reached the other side of the tunnel (Moji side), we went aboveground. We overlooked the opposite bank there. I crossed the sea on foot… I appreciated the people who made the tunnel. I couldn’t walk the bottom of the sea without them. 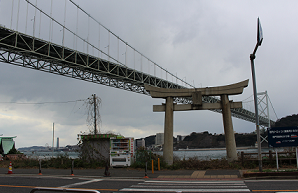 What is “the bridge”…!? Yes, it’s Tsunoshima Bridge.
http://www.oidemase.or.jp/tourism-information/spots/11030
I found the photo of the bridge when I was searching something. I wanted to go there from that day on. It took an hour and a half to get to the bridge. What a long trip!

And we finally arrived at Tsunoshima Bridge. 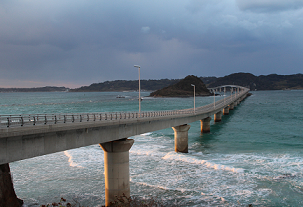 … However, the time we arrived at the bridge was almost after sunset. The weather was bad, too. So, we couldn’t see the beautiful sunset because it was hidden by the thick clouds… 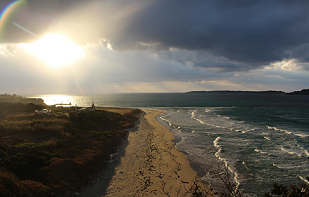 The more we expected, the more we got disappointed. We came all the way from Hiroshima…. It was regrettable that it had bad weather. Boo-hoo….

The photo I saw on the Internet was very beautiful. It might be better to visit the bridge during summer since the summer sky is beautiful! We can go to the beach in summer, too. I want to try a seaweed soft-serve ice cream only sold at the island, which is very strange (rude)♪

I wasn’t familiar with Yamaguchi, but it was easy to reach from Hiroshima. I’d like to visit Yamaguchi again. We headed home, hoping that we can visit the bridge again in the near future.