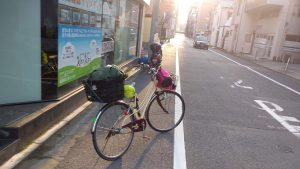 Since about a month ago two of the Evergreen hostel staff were planning on going to Shikoku pilgrim in March and after some training and many BBQs the time arrived. One night before we got together to plan the trip, it was cheaper if we ride the bike to Kure and take the ferry from there instead of Hiroshima port, about 1000 yen cheaper so it was worthy.

Sunday before eight am we had some coffee and prepare our bikes with the camping tent and sleeping bags, some extra water, onigiris. It was a wonderful day for riding the bike, the sky had some small clouds and with the promise of a warm day after this cold winter. We drove to Kure and after the Yamato museum we sailed to Matsuyama. As little kids neither of us couldn’t sleep the night before due to the nervous of the trip so we took a nap on the ferry.

We started from the temple 53, after crossing a long tunnel and getting into the suburbs of Matsuyama we arrived to the temple, it was a matter of luck that in the very first temple we saw a long line of pilgrims with their white shirts and canes with bells. 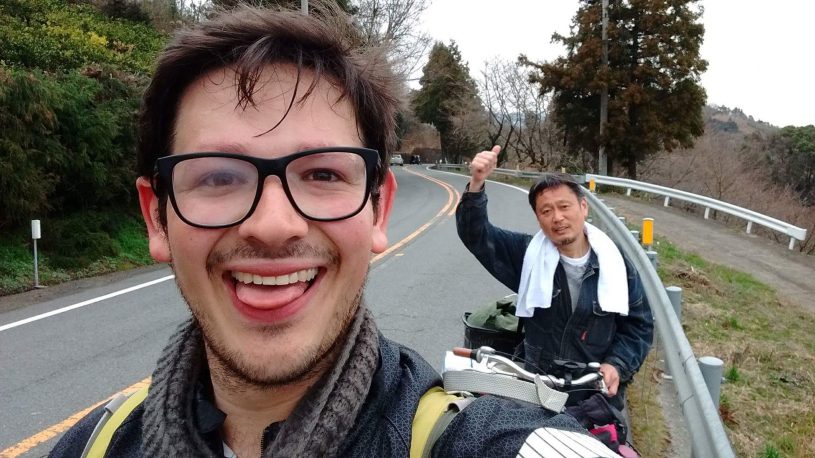 Before getting into the temple one should clean his both hands and mouth with water, the temple was great, I’m the kind of person that never gets tired of visiting temples, I find on them always something special something different. There was a house in the entrance of the temple in where travelers could take a rest and they offer us some green tea and a chocolate, after that a lady gave us an orange that latter became a treasure and the most delicious one I have ever eat.

There is no Japan without Onsen and in Matsuyama they have the Dogo-onsen, one of the oldest in Japan and famous for the movie Spirited Away, the price was about 400 yen and one could take a shower and enjoy of the main room, the legend says that there was an egret that was injured from his shin went to the hot water every day and after some time the egret recover from the injury and flew away, so the people start believing that the waters are good for the health. I’m not sure if they are good or not but I felt amazing after that hour there. 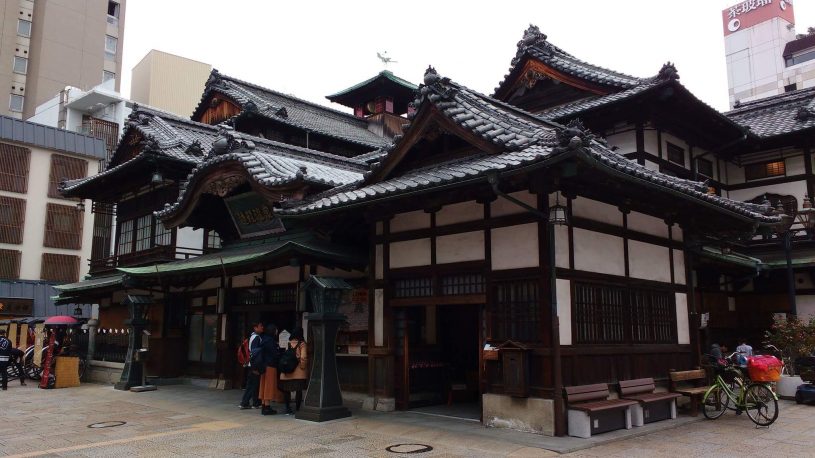 We kept visiting other temples on our way down until the number 47 each of them with special features, a huge stone dragon outside one impressed me a lot, most of them easy to reach inside the city, the last two were already a little bit far from the city and in the 47 was the one where we asked if it was possible for us to stay there, after they agreed we went walking to the temple No. 46 and to get some dinner in a convenience store, the closest open one was about an hour walking. 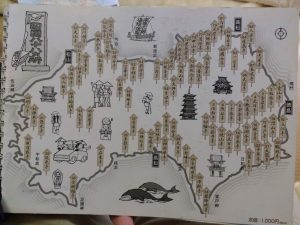 Monday morning: the second day seemed a way colder than the day before but still was a great weather and maybe the best for us because we had to push the bikes most of the way up in the mountain for about 4 or 5 hours and we needed to stop many times to take a rest during that time and then ride downhill until we reached the temple number 44, it was not late so we headed up to the temple No. 45 but my maps app gave me a different route and we decided to take it for the sake of fun, it was a way harder one, there was this 800m mountain you have to hike in a really steep hill, I barely could make it to the top and then we took a wrong route and when we realize it, held back and take the right one we were only 20min away from the temple but the Sun was close to hide on that day so we decided to attack again next day and go back to the city and look for a place to camp.

We found a nice baseball field and put the tent in Kuma park, we made some dinner and had a couple of beers for the muscle recovery, that night the temperature went down as crazy and made it impossible to take a rest, on the morning of next day we took the official route to the temple 45 and it was way easier than the last day. That temple is amazing, is below a huge rock on the mountain and from up there you can see far away in the forest.

We headed back to Matsuyama and just after that big hill we crossed on the second day we took it downhill on the third one, over 10 km of super fast, windy and cold biking, amazing but I was wondering if my fingers could get frozen and I will be able to open the hand after that, also the close curves and traffic make things a little bit dangerous and the bike breaks aren’t the best for that kind of downhills. We arrived to Matsuyama full of adrenaline but also tired after three days so we had a proper lunch and then look for a hostel in the city, it was really cold and in some parts we saw some snow falling down.

As a reward we went to a Onsen, according to them its the biggest on west Japan and it was pretty big! With sauna, many water massages and even an electric shocks pool, that was horrible! Just after the sauna we had some dinner to celebrate the end of the adventure, on the last day we took the ferry back to Hiroshima. It was awesome and unforgettable experience!